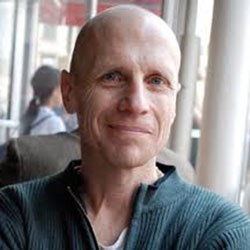 Rev. Daiken Nelson, Sensei began Zen practice 33 years ago in Iowa, where he was born.  Since that time, he has practiced with several teachers within the White Plum Zen Lineage of Taizan Maezumi Roshi and the Zen Peacemaker Order of Roshi Bernie Glassman.  Daiken ordained as a novice priest in 1996. In October, 2013, Daiken received Shiho (Dharma Transmission/Authorization To Teach) from Roshi Paco Genkoji Lugoviña, a successor to Roshi Bernie Glassman.  Daiken is the Founder/Guiding Teacher of the Pamsula Zen Center in W. Harlem, NYC.  Prior to focusing on Zen, Daiken was a Social Worker—working with the homeless and those suffering from chronic mental illness and substance abuse issues.  Daiken is the founder and director of the Maṇḍala Café.