The Barre Center for Buddhist Studies has published the following books. All are available to purchase from our online bookstore and onsite. 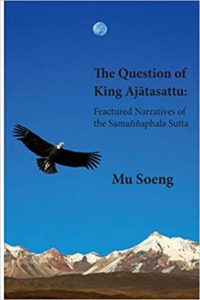 The Question of King Ajātasattu: Fractured Narratives of the Samaññaphala Sutta by Mu Soeng (2020) The Samannaphala Sutta (“Fruits of the Ascetic Life”) is one of the most hallowed discourses attributed to the Buddha in the Pali Canon. It is also a historical document of great significance which provides important details about daily life of the general population and the Buddhist monk in ancient India. This commentary takes a detailed look at two strands in the discourse—the historical and the doctrinal—and finds a number of fractures in the narrative. The commentary’s exploration raises the possibility that the conversation between the Buddha and King Ajatasattu could not have happened the way it has been portrayed in the discourse. This raises the further possibility of significant alteration and editing in later generations in the narratives of the discourse. These are significant questions in our understanding of what is “early” and what is “late” in the Pali discourses of the Buddha.The perspectives offered in the commentary should be of interest to students of early Buddhist history. It remains sympathetic to a viewpoint that creating the narrative of the discourse may have been a historical necessity for the creation of the earliest Buddhist community itself, and its legitimization as an autonomous jurisprudential entity. It also remains sympathetic to the traditional perspective that the sutta’s doctrinal presentations are central to the articulation of Buddha’s dhamma and vinaya in ancient India. 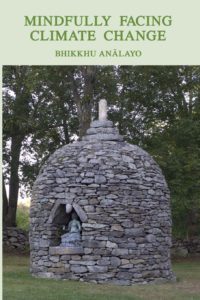 Mindfully Facing Climate Change by Bhikkhu Anālayo (2020) provides a unique contribution to the literature on Buddhism and the environment.  It is unique in presenting a systematic analysis of climate change structured according to the four noble truths as presented in early Buddhist teachings and providing detailed meditation instructions for cultivating resilience and balance in an age of climate destabilization.   In this framework, climate change becomes a field of practice.  The book stands alone as a contribution to the literature on Buddhism and the environment and can also supplement Bhikkhu Anālayo’s online program (video lectures and guided meditations). All proceeds from the book and online program will be dedicated to reducing the BCBS carbon footprint through solar power generation and weatherization to reduce our heating needs. 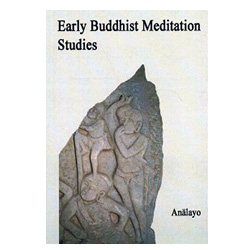 Early Buddhist Meditation Studies (Volume 1) by Bhikkhu Anālayo (2017). In this book, Bhikkhu Analayo, scholar and meditation teacher, examines central aspects of Buddhist meditation as reflected in the early discourses of the Buddha, based on revised and reorganized material from previously published articles. The main topics he takes up are mindfulness, the path to awakening, absorption, and the brahmaviharas. He compares parallel versions of the discourses in a variety of languages which offers a window on the earliest stages in the development of these Buddhist teachings. 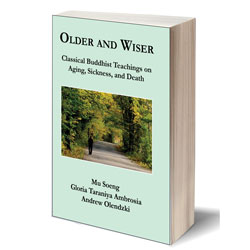 Older and Wiser: Classical Buddhist Teachings on Aging, Sickness, and Death by Mu Soeng, Gloria Taraniya Ambrosia, and Andrew Olendzki (2017). This book is offered as a support for all of us dealing with one very real question: How do we continue seeking and finding happiness, inner tranquility, and wisdom in our elder years? Through both scholarly examination and thoughtful reflection, these selected discourses guide us in how to apply the teachings of the Buddha to our daily life and practice. Embodying the teachings in this way, we find that even in our elder years it is still very much possible to find ease and joy, even while dealing with the inevitabilities of aging, sickness, and death. The three teachers—a Theravada scholar well-versed in the early teachings of Buddhism; a Zen scholar and practitioner from the Korean Zen tradition; and a lay Buddhist minister and Dhamma teacher rooted in the Thai Forest Tradition—offer a range of perspectives speaking to a wide range of interests, points of view, and levels of experience with meditation and Buddhism. A collection of reflections is additionally offered, which can be used both for private contemplation or to support discussions among friends or communities.