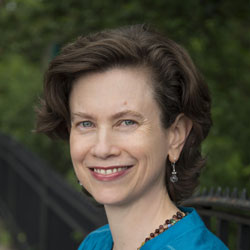 Dr. Pilar Jennings is a psychoanalyst in private practice based in New York City with a focus on the clinical applications of Buddhist meditation. She received her Ph.D. in Psychiatry and Religion from Union Theological Seminary, and did her prior graduate work in medical anthropology at Columbia University. She has been working with patients and their families through the Harlem Family Institute since 2000.

Dr. Jennings is a Visiting Lecturer at Union Theological Seminary; Columbia University; and a Faculty Member of the Nalanda Institute for Contemplative Science. She is also a facilitator of a Columbia University Faculty Seminar addressing topics related to slavery and memory, with a focus on the inter-generational transmission of trauma. She has given workshops and retreats internationally on the Buddhist and psychoanalytic approach to trauma, the relevance of spirituality in clinicians, and the unfolding conversation between Buddhist and developmental psychology.

Her publications have included “East of Ego: The Intersection of Narcissism and Buddhist Meditation Practice,” “I’ve Been Waiting for you: Reflections on Analytic Pain,” “Imagery and Trauma: The Psyche’s Push for Healing,” and Mixing Minds: The Power of Relationship in Psychoanalysis and Buddhism released through Wisdom Publications. Her most recent book: To Heal a Wounded Heart: On the Transformative Power of Buddhism & Psychotherapy in Action, is a psychoanalytic memoir exploring her entry into clinical work as a practicing Buddhist.

Dr. Jennings is a long-term practitioner of Tibetan Buddhism in the Sakya lineage and student of Khenpo Pema Wangdak, founder and guiding teacher of the Vikramasila Foundation. Her most recent retreats at the Garrison Institute and Omega Institute have addressed the Upaya, or skillful means in response to trauma and psycho-spiritual efforts at healing.

Buddhism and Psychotherapy: A Healing Partnership: Path Part I