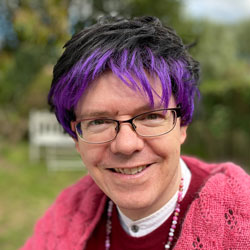 Bee Scherer has been practicing for decades in the Sakya and Kagyu traditions of Tibetan Buddhism and has served as a dharma teacher for fifteen years. A former professor of Religious and Gender Studies at Canterbury CCU, in the U.K., Bee now heads Buddhist Studies and Buddhist Spiritual Care at the Vrije Universiteit Amsterdam. Trained in a number of classical Buddhist languages, Bee has published widely in Buddhist Studies as well as gender and sexuality theory. Both as an academic and as a queer/non-binary/trans* & dis/ability advocate, Bee brings their unique perspective to Buddhist practice, embodiment and social engagement.