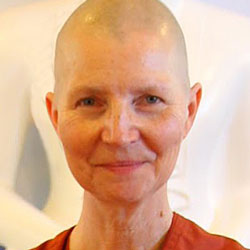 Ayya Dhammadīpā is the founder of Dassanāya Buddhist Community. She is a dual lineage teacher – a fully ordained bhikkhuni in the Theravāda tradition, and a Dharma transmitted teacher in the Shunryu Suzuki lineage of Sōtō Zen. The shift in her practice from Zen to the Theravāda tradition is a natural extension of her longtime metta practice and study of the Pāli suttas. Ayya has been practicing Buddhism since 1987. In addition to English, she teaches in Spanish, an expression of her Latin heritage. Ayya is also an author whose writings have been published in the “Lion’s Roar” and “Buddhadharma” magazines. Her recent book is titled, “Gifts Greater Than the Oceans: Benefits of the Buddhist Practice of Giving.” She is mother to a lovely adult daughter, and she enjoys watercolor painting and sewing.