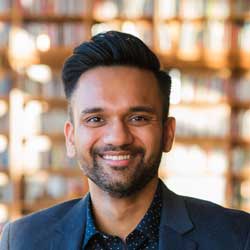 Anu Gupta is a dedicated practitioner in the Insight and the SRF traditions. He was introduced to the Dharma through his family and has sat numerous retreats in North America and Asia since 2004. His approach to the Dharma is rooted in his intersectional identities as an immigrant, cisgendered gay man, and a person of color of Asian Indian descent. Outside of his Dharma practice, Anu runs BE MORE with Anu, an edtech company that trains organizations in breaking bias using mindfulness to advance diversity, equity, inclusion, and belonging (DEIB). He developed BE MORE’s science-backed approach after 15 years of research that was funded by the National Science Foundation, Nathan Cummings Foundation, the American Heart Association, among others. Anu is a sought-after expert in breaking bias, behavior change, and well-being. He has extensively written and spoken about this work, including on the TED stage, SxSW, the Oprah Conversation, Fast Company, and Newsweek.

Prior to founding BE MORE, he worked as an attorney, a research scientist, and a middle school teacher in the United States, Europe, and Asia. Anu is a trained mindfulness and yoga teacher (500-hours) and his meditations can be found on the Insight Timer, Open, and the Ten Percent Happier meditation apps. He obtained his JD from NYU Law, where he was a Root-Tilden Scholar, an MPhil in Development Studies from Cambridge University, and a BA in International Relations & Islamic Studies from NYU. Follow Anu on IG or TikTok @bemorewithanu to get your daily Dharma dose.

Breaking Bias with the Brahmaviharas