This article is one of a series of occasional submissions by long-term practitioners at Cambridge Insight Meditation Center. The purpose of this series is to highlight the on-going practice sessions at CIMC and how these sessions are bringing new understanding and clarification to those enrolled in those sessions. These submissions have been approved by the guiding teachers at CIMC.

A member of our ongoing “Old Yogis” prac­tice group at Cambridge Insight Meditation Center (CIMC) recently told me that one of our homework assignments had helped her overcome her aversion to an IMS work retreat job she had disliked intensely. During the womens retreat at IMS last March, she was assigned to the kitchen, where most of her tasks suited her fine. But washing the floor in the walk-in refrigerator was anathema. She dreaded having to drag out the heavy jugs of oil, the cumbersome bags of flour, and the big boxes of fruit and vegetables, and having to drag them back in when the floor was dry. She hated the mop, with its long dingy strings; and she especially disliked having to wring it out over and over again. When the job was done, she inspected her work like a boot camp sergeant, judging herself a failed floor washer.

During sittings in the meditation hall, her mind often transported her to the dreaded walk-in refrigerator, her aversion assuming the pro­portions that such aversions sometimes do on retreat. She tried one of the practices we had focused on in our Old Yogis group—ascribing equal meaning to each and every activity, and engaging wholeheartedly in whatever one is do­ing. But to no avail—washing the floor just didn’t measure up to eating a delicious lunch, or even to her other kitchen duties for that matter. Narayan Liebenson Grady, one of the retreat teachers and also our Old Yogis teacher at CIMC, suggested in a group interview that the practice of “leaving no trace”—another one of our Old Yogis assignments—might be helpful. (Our group has been focusing on no-self (anattā) for several years and on the aggregate of perception (saññā) for some months.) “When you do something, you should burn yourself completely, like a good bonfire, leaving no trace of yourself,” counsels Suzuki Roshi in Zen Mind, Beginner’s Mind. Our preconceived ideas about our activities leave traces that “make our minds very complicated,” he writes, as do our recollections of our activities. But, he explains, when we act “with a quite simple, clear mind, we have no notion or shad­ows and our activity is strong and straightfor­ward.” When the yogi who hated the string mop began practicing leaving no trace, “Washing the floor became a whole different experience,” she said. “It was just another part of the job, and I was able to do it mindfully and then let it go.”

Our Old Yogis group focused on Suzuki Roshi’s counsel for several weeks, discussing its meaning in our weekly meetings and practicing leaving no trace between classes. Several mem­bers of our group said they viewed “leave no trace” as a fundamental reminder to be mindful.

A number of us observed what a powerful ally this practice can be in such relatively simple situ­ations as trying to let go of anger when another driver cuts us off, or letting go of the pleasure of a good meal when it’s over. One yogi described his efforts to leave no trace in interactions with others—attempting, as he explained, “to keep conversations clean, so that when they’re over, there is as little residue as possible, as little as possible for the other person to deal with. When there’s ‘less self,’ he said, there are fewer traces in what you leave around, whether it’s a plate or a hurtful comment.”

Another assignment that resonated strongly for many of us was being aware of wanting to be seen in a certain way, or not wanting to be seen in a certain way. One yogi I queried about this said he is very invested in being perceived as “a nice guy.” He worries, for example, that because he is a man, women are sometimes afraid of him, and he feels wounded when they are. “This as­signment helped me lighten up and let go and laugh at myself a little bit,” he said. “How is a woman alone on a dark street supposed to know that I am a nice guy and that she has nothing to fear from me?” Another yogi said she recognizes that she wants to see herself as a good mother and that her daughter’s behavior has been her measure of her success as a mother. “We mothers have difficulty letting go of the notion that how our children are doing in the world reflects on us. It’s hard to see our children as separate indi­viduals with their own Karma. I thought I was a terrible mother when my daughter was a teen­ager. Everything teenagers do that parents don’t like was a sign that I had blown it. Now that my daughter is a lovely young adult, my percep­tions about myself as a mother are much kinder and less judgmental.” Because of our work with saññā she added, she is increasingly aware that her perceptions about being a good mother aren’t necessarily true, and she is less inclined to judge herself as either a bad or a good mother.

In our class discussion about this assignment, a member of our group pointed out how liberat­ing it would be if we were unconcerned with others’ perceptions of us—positive perceptions as well as negative ones. “It’s tempting to want to just get rid of others’ bad opinions of us,” he said. “But if we really want to be free, I think we have to let go of our investment in peoples’ good opinions too.” In fact as he noted, it’s not pos­sible to let go of the bad opinions and hold onto the good ones, since good and bad are interde­pendent.

In the months during which our Old Yogis group has worked with saññā, we have also prac­ticed being aware of perceiving experiences as good or bad, being aware of seeing others as better or worse than or equal to ourselves, and focusing on a person we are close to and noticing our perceptions about him or her. Shortly before our late-summer semester break, Narayan read some of our past assignments aloud and reflected that just hearing them is a teaching. One reason this is so true, I think, is that she chooses assign­ments that invite us to be aware of things that we do all the time, or of issues that come up for us constantly.

Most recently, we’ve been focusing on happi­ness. We’ve practiced being aware of different sources of happiness and of things that we thought would make us happy but didn’t. In class we’ve talked about how the cultural model of happiness that exalts pleasure, achievement, prestige, and material things is ultimately unsat­isfactory. And we’ve reflected on the revelation of a monk who wrote on the wall of a cave in Thailand, “Oh joy, to find that there is no happiness to be found in this world.” The monk had discovered that it is possible to find great joy independent of conditions.

A yogi who is a composer told me about an experience he had that fit the cultural model of happiness but turned out to be quite fraught, as our monk could no doubt have foretold. One of his pieces was chosen to be performed at a pres­tigious venue with a top orchestra. “Everyone said how wonderful it was and how happy I should be,” he said, “but I thought that there was going to be a lot of dukkha.” As he had anticipated, the rehearsals were stressful, and he was anxious that there wasn’t enough rehearsal time. And although the performance went quite well, “there was a lot of worry and suffering throughout.”

Around the same time, he said, he was carry­ing his laundry home from the laundromat when “this really deep joy welled up for no apparent reason. It was a simple but profound sense of peace and lightness, and it was totally unex­pected. This is the happiness that comes from not being burdened with trying to get some­where.”

During our semester break, our assignment has been to notice the changing nature of hap­piness. When we resume, it will be instructive to hear others’ insights. And if the work we have done in our Old Yogis group has not convinced us to wholeheartedly share the monk’s exhilara­tion over his discovery that worldly happiness can’t be found, it has surely contributed to our collective well-being. 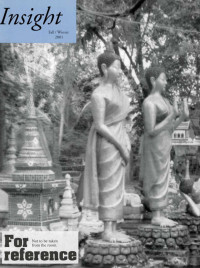 It Can Be Very Simple

A Simple Matter of Choice?