When I look up the word “connected” in my dictionary, I find synonyms such as “bound,” “fastened,” and “attached.” Last I heard, these were not considered a good thing in Buddhism. So why do we hear so much about “interconnectedness” these days? Was the Buddha really teaching us that “all things are interconnected?”

The explanation usually given is that this is what is meant by dependent origination. But is it? As sometimes happens, I think in using this term we are seizing upon a notion from the western tradition that comes easily to hand, but which misses the nuance of the Buddha’s teaching. The traditional term in the exegesis of the commentaries for such an idea is “near enemy.”

A definition that is obviously off the mark can be recognized as a “far enemy,” called an enemy because it hinders us from properly understanding the concept at hand. A near enemy is more insidious, because it seems like a plausible—even desirable—definition, but it nevertheless leads us astray.

My concern about the word “interconnected” is that it rests upon a spatial image suggesting a relationship between two or more things. It tends to be used as an adjective, describing the quality of nouns. Some person, place or thing is connected or joined to someone, some place or something else. As such, it forms a cornerstone of western thought, from the logos of the classical philosopher, to the great chain of being of the Christian theologian, to the unified field of the contemporary materialist. On these grounds alone it is worthy of some suspicion as a viable means of conveying unique Buddhist ideas.

Buddhist thought is deeply rooted in process thinking, in which becoming is too relentlessly changing to ever coalesce into being. Dependent origination is more of an adverb, describing the process of events co-occurring in time, than it is a description of things or their properties. Events are shaped by multiple causal factors as they arise in each moment of constructed experience, and the patterns informing this building of the world can be discerned by careful introspection. This is a very different idea than the interconnectedness of all things.

At the cutting edge of human awareness, when the mind is focused skillfully on the birthing of phenomena, there is nothing formed enough to connect with anything. Meditation accesses the flow of experience, upon whose leading edge our world and our self get formed. The Buddha is inviting us to notice how that process is shaped and influenced by a host of conditions unique to that moment. The language itself is describing a fluid event: When this occurs, that comes to be; from the arising of this, that also arises. And when this no longer occurs, that comes to an end; from the cessation of this, that also ceases. In the teaching of dependent origination, the Buddha is showing us something very profound about the process of becoming.

By contrast, the teaching that “all things are interconnected” is a derivative conceptual construction— beautiful, to be sure—but after all, just an idea. I can picture Hui Neng scrawling across the monastery wall something like “There are no things, anyway! Let alone any connection between them.” I’m no scholar of Chinese, but I suspect that even the lovely Buddhist simile, Indra’s net, would more usefully be translated as Indra’s network. The essence of the imagery is the mutual reflection of every jewel in the infinite facets of every other jewel, not in some knotted-together causal scaffolding binding the gems together. Now that we have a wireless network available to us as a paradigm, perhaps its time to retire the fisherman’s snare.

I understand the intention behind using the word “interconnected.” If every act tainted by greed or hatred creates and reinforces an illusory sense of self by its “holding on” or “pushing away,” and if this falsely constructed self becomes a source of alienation and suffering, then surely the elimination of the “separate self” will result in awakening to a much wider picture of reality. All this is true, but when the little word “separate” is added, it suggests that what one opens to is a non­separate self. But I think the early Buddha would consider this to be just trading a problem for a much bigger problem.

The quandary of the human condition is not that we are connected to too limited an object and need to connect instead to a larger object. Rather it is that the very mechanism of connectivity, attachment, is inherently a cause of suffering.

All connections are limiting because by nature, and often unwittingly, they follow the channels of our desires. We want to connect with what is beautiful and gratifying in ourselves, in others and in the world, but are less enthusiastic about connecting with evil, with cruelty, and with disease. The webs we spin are by and large the projection of our desires into the space we inhabit, and more often than not are meant to snare the objects of our heart’s content or shield us against pain.

The Buddha is not telling us to be disconnected in the sense of uncaring or selfish—quite the contrary. But he is pointing out something very subtle about human nature. Perhaps what we need is to coin a new word, something like internonattachedness. By all means let’s share this universe with everyone and everything else inhabiting it, but let’s maybe learn to do it in a way that allows things to be more naturally as they are. We’ll probably find here a more authentic intimacy.

There is nothing inherently connected about dependently co-arising phenomena. They are merely arising together in experience. The question is, How will we hold ourselves in the midst of this process? The more interconnected we become, the more bound in the net of conditioned phenomena we may find ourselves. I think the Buddha was pointing a way out of all this, but it is not through getting further connected. It has more to do with getting less connected, less entangled, and less attached. 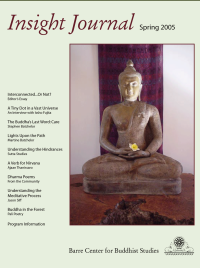 A Tiny Dot in a Vast Universe

A Verb for Nirvana

Buddha in the Forest (Samyutta Nikaya 7:18)