Jean Esther has been practicing the Theravada tradition for the past 22 years. She is a psychotherapist in private practice in Northampton, MA and occasionally teaches meditation classes in the surrounding area.

At the suggestion of my hairdresser about two years ago, I decided to let my hair grow naturally: goodbye permanent brown, hello natural gray! Other than enjoying the occasional positive comment, I truthfully didn’t think any more about it. Then one day across our lunch table in Northampton, a friend exclaimed: “Wow. You’re brave!” Exercising the second factor of awakening [investigation] that night, I looked a little longer and closer in the mirror, still a bit perplexed by her comment. What did she mean that I was “brave?”

In the large circle of “young” adults (ages 19 through 30) and about 12 “older” adults at the first weekend retreat of the Mentoring Program at the Barre Center for Buddhist Studies, I sheepishly confess that I had several mind moments (coming and going of course) where my total existence felt like nothing more than GRAY HAIR! I felt much less alone when a fellow mentor (whose hairline I’ve watched recede over the last two decades) said, “Look at all their faces; they’re all so young and beautiful.”

Okay, is this really a story about hair? Or is it about two different generations coming together with a deeply shared commonality: a devotion to understanding what is true and living from a place of non-harm in our lives? Perhaps a little of both, but the latter is where we set our sails to the wind. Surely, many more people share this interest in dharma. This particular group has formed out of Michele McDonald’s vision of extending a commitment of support to young adults in their spiritual practice. The Mentoring Program is a flowering from the Young Adults Retreat, a four-day retreat for teens ages 14-19 which has been occurring every year for the past 14 years at IMS. Many of the young participants in this three-year Mentor­ing Program have previously sat at IMS, while the rest have had considerable other experience with meditation practice in this country as well as in the East.

The mentors include many longstanding Western vipassanā teachers, as well as several long-term senior students of the Theravada tradition. This is the first program of its kind to take place here in Barre, and hopefully many more like-minded programs to follow. We will be working on a one-to-one basis with each “mentee” throughout the three-year period and will hold at least one retreat each year as a group. There are five major components of the program, which are meant to support and nurture each participant’s spiritual development: 1) daily practice; 2) dhamma study; 3) exploration of sīla [morality]; 4) meditation retreat prac­tice; and 5) interface with personal life issues.

How auspicious it was to have this two-day retreat, which was held June 8-10 at BCBS, coincide with a two-month retreat given by Burmese master Sayadaw U Pandita at the newly constructed Forest Refuge next door. More than 15 years ago, Sayadaw was the original inspiration for the Young Adult’s Retreat, urging two of his senior students, Michele McDon­ald and Steve Smith, to start training programs for young people at IMS.

On Monday afternoon, Sayadaw came to give us a dharma talk. Here I sat with two of my primary teachers of the past 20 years (Joseph and Michele), listening to their renowned teacher instructing young adults whom I have encouraged in their practice for many years. I was thus sitting among four generations of practitioners. This aroused incredible gratitude in me for the many people who, through their willingness to share the dharma, have passed on the teachings for two and a half centuries and have thus made this retreat possible.

With people like this moving forward, the future doesn’t look so bleak to me.

When it’s my turn to “pass on” what I’ve learned, all of a sudden the hindrances light up in neon! Aversion, desire, sloth, restlessness and my favorite, doubt! Pass on what? The more I practice, the less sure I am of knowing ANYTHING! Besides, developing mindfulness, at­tending to sīla, deepening wisdom and compassion… isn’t that a trillion billion lifetimes of work? (I think it’s time for a piece of chocolate and a nap!)

That said, I’m not sure who’s mentoring whom here. As one mentor so aptly put it, “Who’s helping whom here? Who’s learning from whom? It’s all shaken up.” It is kind of confusing. What remains definitely clear is that skin textures vary with age. What is also clear is the joy, awe, respect and inspiration I feel in the presence of these young adults. Being around them, my heart rests. With people like this moving forward, the future doesn’t look so bleak to me. And I say this in the midst of what feels like a rapid deterioration of our planetary human capacity to wisely and lovingly co-exist with each other.

According to U Pandita, the recipe for true happiness is to simply follow the traffic lights: Green means GO. Red means STOP. 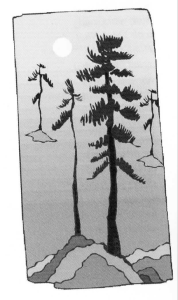 When you see green (wholesome thoughts, words and acts), you GO. When you see red (unwholesome thoughts, words and acts), you STOP. Following these instructions is understanding the laws of karma (cause and effect). Which choices lead us to happiness? Which choices lead us to unhappiness? These simple instruc­tions are clearly not age-determined.

Neither, so it appears, is the leadership within this group. Its particular mark evolved early on: it is held by all of us. Its attributes include listening well and following what emerges. Good medicine for all of us, regardless of our personal tendencies towards extroversion or introversion. It can be a rich practice ground for looking at our habits in a group. The depth of sangha among the participants (old and young alike) is a very strong underscoring of the Buddha’s commentary to Ananda that “spiritual friendship [kalyāṇamitta] is the whole of the holy life.”

The Buddha also said that suffering is what motivates us to become free. I don’t see any greater time than now to be motivated. U Pandita spoke of Americans as “having burning hearts in the middle of air-conditioned rooms.” My heart is definitely burning. This seems observably so in the others around me as well. If, in this little group of people, I can offer a listening ear, a kind word or act, or a bit of self-restraint when that is of benefit, then perhaps, in my own small way, I can give something back of what has so preciously been given to me. It is an honor and a privilege to be part of this group. May its goodness serve to benefit all beings everywhere. 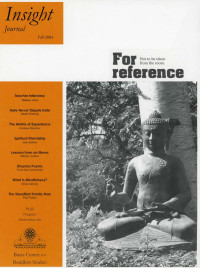 The Working of Boundless Compassion

In This World, Hate Never Yet Dispelled Hate

A Comprehensive Matrix of Constructed Experience

Lessons from an Illness

What Is Mindfulness… And Why Is It Important to Therapists?