Guarded by many, swords in hand,

I dwelt in the city—frightened!

Devoid of any fear or dread,

He meditates, plunged in the woods.

Bhaddiya was a great Sakya chieftain, the son of the matriarch Kali-Godha whom the Buddha identifies as the most high-born person in his circle. He was good friends with Anuruddha, the Buddhas cousin (and Ānanda’s brother), who persuaded him to go forth with him into the homeless life under the Buddha’s instruction.

Both friends, like Siddhartha, enjoyed a privileged upbringing, and had to make some adjustments to the renunciate life of a wandering bhikkhu.

At one point Bhaddiya was overheard uttering the phrase “Ah, what bliss; Ah, what bliss;” as he sat alone in the wilderness, and his fellow monks suspected that he was remembering the pleasures of his earlier life and thus not engaging fully in the rigors of forest practice. When called before the Buddha to explain himself, it turns out that just the opposite was true. As he put it in a parallel prose passage of the Vinaya:

“Formerly; when I was a ruler, there was a fully appointed guard both within my private quarters and outside… both within the town and outside…and throughout the countryside. But although being guarded and warded thus, I dwelt afraid, anxious, fearful and alarmed. But now, dwelling in a forest and at the root of a tree and in an empty place, l am unafraid, not anxious, not fearful and not alarmed. I am unconcerned, unruffled, dependent on others, with a mind become as a wild creature’s. This is why I was uttering the phrase, ‘Ah, what bliss; Ah, what bliss’. ” (Cullavagga 7:1.6)

I suspect this was very close to the Buddha’s own experience as he traded the closely controlled life of the palace for the open road of the wanderer. There may even be a lesson here for the rest of us. The more one has, the more one has to lose. The greater the position of authority or celebrity, the more of a target one might be for the ill will of others. Living simply and modestly may well be, as Bhaddiya discovered, the source of immense satisfaction. 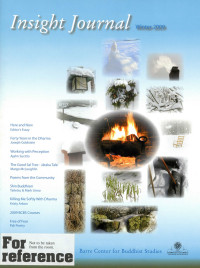 A Simple Turning in Place: Forty Years in the Dharma

Killing Me Softly with Dharma