Once upon a time there was a royal fig tree called Stead­fast, belonging to king Koravya, whose five outstretched branches provided a cool and pleasing shade. Its girth extended a hundred miles, and its roots spread out for forty miles. And the fruits of that tree were indeed great: As large as harvest baskets—such were its succulent fruits—and as clear as the honey of bees.

But then a certain man came along who fed upon as much of Steadfast’s fruits as he wanted, broke off a branch, and wan­dered on his way. And the deva who dwelled in Steadfast thought to herself: “It is astonishing, it is truly amazing, that such an evil man would dare to feed upon as much of Steadfast’s fruits as he wants, break off a branch, and then wander on his way! Now, what if Steadfast were in the future to bear no more fruit?” And so the royal fig tree Steadfast bore no more fruit.

So then king Koravya went up to where Sakka, chief among the gods, was dwelling, and having approached said this: “Surely you must know, she, that Steadfast, the royal fig tree, no longer bears fruit?” And then Sakka created a magical creation of such a form that a mighty wind and rain came down and toppled the royal fig tree Steadfast, uprooting it entirely. And then the deva who dwelled in Steadfast grieved, lamented, and stood weeping on one side with a face full of tears.

And then Sakka, chief among the gods, went up to where the deva was standing, and having approached said this: “Why is it, deva, that you grieve and lament and stand on one side with a face full of tears?” “It is because, sire, a mighty wind and rain has come and toppled my abode, up­rooting it entirely.”

And then Sakka, chief among the gods, created a magical creation of such a form that a mighty wind and rain came down and raised up the royal fig tree Steadfast, and its roots were entirely healed.

Perhaps this is a true story—perhaps Stead­fast is a name for the entire planet, not just a mythological tree. How else might we explain the earth’s great forebearance and continued beneficence in the face of the rapacity and de­struction we have wrought upon her? I think Gaia, the deity inhabiting the abode of our lovely Earth, was taught this lesson by Sakka in an­cient times, and has with great patience and dig­nity put up with the worst we can render. If this is true, then she will not give us a sign when we have gone too far—perceiving this is our own responsibility.

Like every Buddhist story, this one works on many levels simultaneously. It is no accident that the great tree has five branches, or that the word used for each portion is khandha—the term designating the five aggregates of form, feeling, perception, formations and consciousness. The man eating his fill of fruit is manifesting greed, craving or desire, and his breaking of the branch represents hatred, anger or aversion. These are two of the three poisonous roots out of which all unwholesome action arises (the third–ignorance–is always present when others occur.) Thus the entire image is representative of a person being wronged by another or facing the eruption of their own latent tendencies for harmful action.

Notice that the story does not teach the “evil man” the folly of his ways, since there is often nothing one can do to avoid such people or such inclinations in oneself. The teaching is more about our response to trangression. Sakka’s point is that it is self-centered to react petulantly to such an affront, and that the only suitable response is with kindness and generosity—to oneself as well as to others. As the Dhammapada so aptly says, “Never at any time in this world are hostilities resolved by hostility; but by kindness they are resolved—this is an eternal truth.” (Dhp 5)

This teaching is given to Dhammika, a monk who complains of his treatment by certain laypeople. The Buddha reflects the situation back upon Dhammika, who as it turns out does not treat his fellow monks very well. It is an occasion to teach Dhammika, with the help of this story, the “dhamma of a recluse,” which boils down to “not returning the insult of the insulter, the anger of the angry or the abuse of the abuser.” 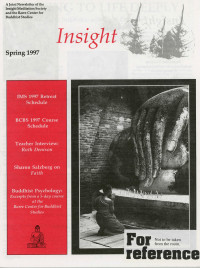 Faith: Its Role and Meaning in a Buddhist Wisdom Tradition

No Greater Contentment: The Poem of Bhuta (Theragāthā 522-526)