So should you see all of the fleeting world:
A star at dawn, a bubble in the stream;
A flash of lightning in a summer cloud;
A flickering lamp, a phantom, and a dream.

However one reflects on them,
And carefully investigates:
They are empty and deserted
To one who sees them properly.

Their lineage is only this:
A nonsense-babbling fantasy,
Revealing itself a killer.
No essence is discovered here.

This famous verse serves as a climax to the Diamond Sutra, a foundation text of the Mahāyāna tradition. Here we see the Sanskrit version in its original script, along with a transliteration and literal translation, as well as a version translated from the Chinese (quoted in Mu Soeng, The Diamond Sutra, p. 135). The same sentiment is articulated in the Pali verse on the right, taken from the Saṃyutta Nikāya. Notice that the Pali verse is referring to each of the five aggregates in turn, while the Diamond Sutra passage lumps them all together as “conditioned phenomena.” Notice also how the Sanskrit verse is more of a specific list of metaphors, while the Chinese version tends to be more poetic and somewhat less literal. Of course we recognize the Pali and Sanskrit words for bubble: bubbula and budbuda.

The sentiment is clearly the same, however, in each of the different renditions. When we place them together like this, we can trace a movement that is common in the development of Buddhism: The Pali texts may contain a detailed psychological teaching; the popular Mahāyāna texts capture its essence in more generalized terms; and the Chinese versions of these texts point more to concrete natural images compatible with its own rich poetic tradition. 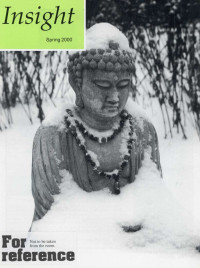 A Question of Skill

The Interdependent Arising of Feeling (Insight into the Aggregates)

The Experience of Feeling (Insight into the Aggregates)

A Day of Practice and Discussion, Inspired by the Maṇgala Sutta

The Healing Medicine of Dhamma (Milinda-pañho 335)