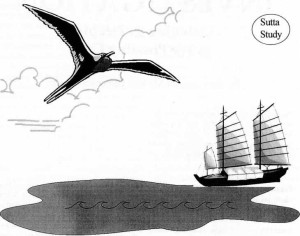 “In ancient times when seafaring merchants put to sea in ships, they took with them a bird to sight land. When the ship was out of site of land, they released the bird; and it flew eastward and westward, northward and southward, upward and all around. And if the bird sighted land nearby, it was truly gone; but if the bird saw no land, it returned to the ship.” – Anguttara Nikaya 6.54

The word used here for “truly gone” is tathāgatako (translated by E.M. Hare in the PTS edition as “gone for good”), and this story helps us considerably in un­derstanding how the Buddha used the epithet Tathāgata to describe himself.

His given name was Siddhattha; as a wandering ascetic he went by his mother’s clan name, Gotama; he was known throughout his world as the sage of his father’s family, or Sakyamuni; and when enlightened he became known as Buddha, the Awakened One. His follow­ers most often referred to him as Bhagavant, or “Blessed One,” but the name he almost always used for himself was Tathāgata.

Tathāgata has always been an awk­ward word to translate. Tathā on its own means something like “so,” “thus,” or “in this way;” and gata is the past particible of the verb to go, and simply means “gone.” We therefore often find the phrase translated in the texts as “Thus-gone” or “the Thus-Gone one.” The commentator Buddhaghosa lists eight different ways the word can be con­strued (Digha Atthakatha 1.59), and in the process engages is some characteris­tically creative etymology.

I admit to having never really under­stood the import of the term Tathāgata— until I came across this story. With the image of the bird released by the sailors, searching for land upon which to alight, a number of things began to fall into place.

To begin with we should recognize two ways the expression is used: one refering to the Buddha as a being who will no longer be reborn, and the other describing how the consciousness of an awakened person still in this world re­lates to the object of experience.

Sometimes when one of the arahants passes away, Māra like a dark cloud can be seen searching for where their con­sciousness has become re-established (i.e. reborn). In such cases, the Buddha says of the arahant that their conscious­ness is “not stationed anew anywhere” (e.g.S 22.87). In this sense the Buddha is clearly using the epithet “Tathāgata” to mean that he will not be reborn again—like the bird leaving the ship without re­turning, his consciousness does not alight again in any of the worlds to be­come re-bound with another body.

But there is also a sense in which the phrase aptly describes the nature of the awakened mind here in this life. When his questioners try to pin the Buddha down about whether his consciousness survives after death, he rebukes them by saying that even here and now the con­sciousness of a tathāgatha is untraceable, since there is no means of measur­ing or knowing it (e.g. Sn 1074). The awakened mind is said to be unattached to anything in the world—like a bird that does not alight upon and thus get bound to any object of experience.

In fact learning to un-attach the mind from its fetters is a good deal of what in­sight meditation training is all about. The Satipaṭṭhāna Sutta, for example, (the main text that gives instructions for in­sight meditation) states that when prac­ticing mindfulness properly a person “abides independent, not clinging to anything in the world” (M 10.5). The householder Anāthapiṇḍika, just before his death, received instructions from Sāriputta urging him to train himself thus: “I will not cling to what is seen, heard, sensed, cognized, encountered, sought after, and examined by the mind; my consciousness will not be dependent on any of that” (MN143).

All this combines to suggest that a cru­cial aspect of the Buddha’s teaching is the notion of consciousness being unat­tached to mental or physical objects. In moment to moment practice this means letting go of attachments and letting ex­perience be simply what it is. Perhaps with proper practice we can live as a bird freely circling the ship of our body and our world, rather than as one imprisoned in a cage on its deck. 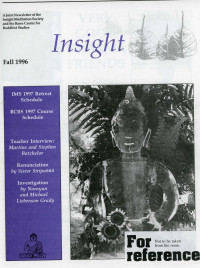