There are two fundamentally different approaches to the attainment of happiness. One is so deeply embedded in our civilization almost everything in our culture supports it; the other is a radically different view offered by the Buddha twenty five centuries ago. Which approach is likely to contribute most to our own happiness? My bets are on the Buddha.

We should begin by offering a rudimentary definition of happiness, for which we might fruitfully turn to modern systems theory. Every organism, whether cellular, social or psychologi­cal, has some sort of membrane defining a boundary between internal and external, between the organism and its environment. Happiness might be simply defined as a state of equilibrium between inner and outer states. Unhappiness manifests as an uncomfortable tension we call desire, the yearning for dis-equilibrium to be resolved.

Which brings us to the two strategies for achieving happi­ness: One is to change the external environment to meet the needs (or “wants”) of the organism; the other is to change the internal state of the organism to adapt itself to the environment. We can either change the world in order to satisfy our desires, or we change our needs by adapting to the world. Both strate­gies aim at removing the agitation of desires, one by fulfilling them and the other by relinquishing them.

The human psycho-physical organism is structured in such a way that the gratification of desire usually means getting each of the six senses to experiencing its object in conjunction with a feeling tone of pleasure. Of course we all know that such moments cannot be sustained; but that does not seem to be a major deterrent. Even if we know that we cannot satisfy all of the senses all of the time, the satisfaction of some of the senses some of the time is still taken to be the appropriate thing to do with ourselves on this earth. Virtually everything in our culture reinforces this, and we are continually encouraged to define ourselves by the range of our desires and our success at quenching them.

The compulsion to change the world to calm our desires is ultimately based on an idea of how things should be, and as such is dependent upon the degree of wisdom we can bring to bear at any moment. We might expound a number of altruistic ideals to change the world for the better, yet even when making progress in some ways, we can be causing major problems in others. It is not that some desires are not more worthy than oth­ers; the problem is with the nature of desire itself.

Because we are so imbued with the notion that happiness is something to be pursued by the continual transformation of the external, it can sound odd to hear the Buddha talk of uncover­ing happiness within. He acknowledged the inevitable develop­ment of dis-equilibrium, which he called dukkha, but suggested we seek out its internal causes, understand them, and solve the problem by means of internal adjustments. According to the Buddha’s analysis, it is not the objective discrepancy between the internal and the external conditions that is the source of un­happiness; it is the desire for the external to change (or to not change, as the case may be), which is itself an internal state. Conditions in the world are notoriously unstable and subject to forces beyond our control, while internal desires are initmate and more accessible. It is simply more efficient to adapt to the world than to alter it.

This is especially true because the mind, as the creator of desires, will inevitably throw up more than can ever be satisfied by even the most successful series of external changes. Even if we were very good at making everything outside of ourselves be just the way we ourselves want it to be (a ludicrous thought, you must admit), we could fundamentally never get everything perfect. Because our desires are always changing, because they are often conflicting, and because the changes of the environment can never keep up with the pace of the wanting mind, the satisfaction of desire as a strategy for happiness will always be a doomed enterprise.

Which brings us to meditation, which involves the continual monitoring of subjective states of mind and body. The full range of sense experience—sights, sounds, odors, flavors, physical sensations and mental phenomena—manifest as mo­ments of knowing. The material body, feelings of pleasure and pain, perceptions of various sorts, dispositions, activities and intentions are all known; even knowing itself is known. And through all this experience are woven the threads of desire, the subtle warnings of the mind for things to be like this or like that, not quite like this or not quite like that. Moment after mo­ment one practices letting go of these desires, surrendering to the world as it is; gently adapting to a moment, and then gently adapting to another moment.

Such inner response to experience re-establishes the equi­librium between ourselves and our world. As each more subtle desire is revealed, we let go of it and rest comfortably in the cessation of that desire. In this way happiness is not pursued and attained, but is rather discovered within. There, underlying the tensions created by wanting, it lies.

The Buddha often talked about the sublimity of happiness that lay beyond the satisfaction of the senses. But this is not the realm in which most of us can live, except, perhaps, for pre­cious moments now and then. What about the push and pull of the busy world, built around the tyranny of desire? How do we live the wisdom of the Buddha’s ancient alternative?

Nothing that is moving very fast can ever slow down sud­denly without crashing. The path of transformation laid out by the tradition is a gradual one, a path of gently replacing one set of habits with another. Most of us are too much a product of the world that shaped us to entirely give up our embedded at­titudes of changing the world to meet our needs. But I suspect there are far more opportunities to adapt instead of alter than we might at first imagine. And as we get the knack of it, others will present themselves.

Let’s try giving the world a rest from our restless need to transform it, and work a bit more on changing ourselves. I trust the Buddha’s promise that we will be happier in the long run. 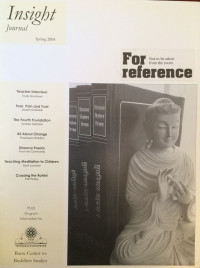 Sharing What You Love

Teaching Meditation to Children and Beginners