When I first turned onto Lockwood Road in Barre, Massachusetts, I had never seen Buddhism in the West. My time had been spent in Asia, predominantly India, practicing in monasteries filled with local people who did not look or act like me. At the time, I thought this was all that existed. Ignorant of the breadth of Dharma in the West, I belatedly realized I had missed its thirty years of fringe existence with little financial support. Even so, I hesitated to trust Western Buddhism.

Much of my focus, prior to my arrival at BCBS, had been on assimilating into other cultures, rather than focusing solely on my experience. Once I arrived in Barre, however, I saw that the investigation of one’s mind was the primary focus. Which side of the hall was for men or which types of flowers were proper for offerings—here, no one cared about those things. You could bow or prostrate, chant, or remain silent, sit in a chair or on the floor, adjust your posture—or not. Attention was on the internal process, not the form. The anonymity I felt while being in Asia was just one kind; here, I could be who I was, as well as be comfortable in my environment.

As I first scanned the shelves of the low-ceilinged library at BCBS, I saw a remarkable collection. The center had a different feel than anything I had seen. The decor was simple, yet elegant—no blinking Christmas lights surrounding the Buddha statues, no saffron-robed nuns and monks. Instead, simple fabrics framed silhouettes of Buddha images; nuns and monks were replaced by middle-aged Americans.

At first, I wondered how effective short, weekend programs could be. I also believed, at the time, that Dharma practitioners were always affiliated with a single center. But I learned from students that BCBS knowingly offers only a portion of the practice. Their style of teachings—rooted in the Pali canon and focused on the fusion of study and practice—was designed to provide a framework for every day of our lives. The large majority of silent practice would be performed away from the center.

At its core, the BCBS model challenges every practitioner to approach all aspects of life—whether a simple trip to the grocery store, or an argument with one’s partner—with the trust that bringing awareness and the teachings of the Buddha into our lives will lead to lasting equanimity and freedom.

BCBS’s flagship offering, the Integrated Study and Practice Program (ISPP), puts this aspiration into practice by infusing our everyday experience with the teachings. Over a year of on-campus and at-home effort, students investigate the teachings of the Buddha in a structured way, contemplating the teachings daily and aspiring to embody them in moment-to-moment experience. This model sounds basic and essential. Unfortunately, having spent a few years immersed in Dharma communities East and West, I have rarely witnessed practitioners actually doing this. This is not solely due to a lack of effort, but also to ineffective curriculums being offered by Dharma communities.

This commitment to incorporating the teachings in one’s daily life is the main reason I was willing to accompany a group of students from BCBS to India this past winter. Having lead similar trips in the past, I tend to approach all programs in India with hesitation: the intense stimuli of being in country can often overwhelm participants. However, knowing the ISPP program and the center’s commitment to its mission, I was confident that this opportunity was worthwhile.

Their commitment to incorporating the teachings in daily life is the main reason I was willing to accompany a group of students from BCBS to India.

The participants in the BCBS 2010 India pilgrimage were seasoned meditators, most of whom had completed the ISPP program. They were travelling not only to see a foreign land, but to investigate their own spirituality while exploring where the Buddha once walked. They arrived in India dressed in a very respectful way, everyone covering their legs and women their shoulders. They looked dignified, reflecting the way they approach their meditation practice.

From the Buddha’s first teaching, on the Four Noble Truths and the Eightfold Noble Path, he understood that practitioners need guidelines, even if the end goal transcends the form. One specific framework combines studying Dharma (written or spoken); contemplating what one has studied; and, finally, meditating on it. The process is not necessarily linear; one can alternate study and meditation, each one feeding the other. This formula, central to the BCBS mission, was the primary model for the pilgrimage itinerary.

The key to this method is balance. I have seen many practitioners meditate with great effort, yet fail to take a step back to see if and how this practice is leading to freedom. Likewise, I have seen those who—well versed in the texts of the Buddha and subsequent teachers—do not look at how it pertains to their own experience. Both paths lead to confusion rather than understanding.

Travelling in India, a similar imbalance can result in the same confusion. So when creating the pilgrimage itinerary, I took this model as my focus but adapted it to what I knew to be the typical everyday experience of travelling there.

In this alternate approach, the study aspect includes both formal textual analysis and meditation. Together these become the formal practice, under “the roots of trees,” away from the day-to-day world. Then, engagement with the world, like the stage of contemplation, is a period of trial and error; practitioners engage with their surroundings, to see if understanding exists. This either results in an ability to embody the teachings while being engaged or reveals a need for more study. Finally, embodiment of the teachings becomes similar to meditation, using our experience of engagement to refine our understanding of the teachings and eventually come to lasting wisdom about the way things are. We move between formal practice and practice in the world, each improving the other.

The itinerary also focused on the unique significance of each place. For example, in Bodhgaya the focus was on meditating under the great Bodhi tree, as well as in various practice centers in the area. In Sarnath, we focused on the teachings from the first turning of the wheel, as well as the culture the Buddha faced when he chose to teach for the first time. In each location, Mu Soeng, the resident scholar at BCBS, framed our experience with appropriate daily reflections.

Gazing out over the rice fields in Kapilavastu, we were at the foot of the eastern gate where, presumably, the Buddha “went forth” and abandoned the life of a householder; we contemplated renunciation. While in Nalanda, where the formal teachings took further root after the life of the Buddha, we investigated the ruins of the ancient university and contemplated the balance between study and practice in our own path.

We also visited individuals and organizations that embody the Buddhist path. One highlight was the Alice Project, a privately run school focusing on educating youth holistically. But most important was the opportunity to visit some of the most profound masters in the modern Buddhist tradition. The most Venerable Sayadaw U Pandita welcomed us to his center in Nepal. His basic robes, presumably in the same style of the Buddha, represented the way he lives his life: dedicated whole-heartedly to the vinaya of a traditional Buddhist monastic. He spoke of the difficulties we face today, bombarded by sensory stimuli from all angles, and how the Satipaṭṭhāna Sutta was a supreme teaching, encompassing the entire path.

As we navigated terrible road conditions, frustrating border agents and other unforeseen factors, each person was able to remain interested in her or his surroundings regardless of the difficulties. Far from their comfort zones, they were always aware of what was happening and impressively poised regardless of the situation. This allowed for an extremely diverse itinerary, filled with opportunity, powerful group discussions, and practice.

Our ambition had been to follow both the Buddha’s footsteps and his teachings. We wanted to make real the model of study and practice, where study means formal practice and our practice becomes engagement with the world. I had feared that this would prove overwhelming, especially with the added challenges of travel in India.

But the challenges created an even more profound outcome. Relationships deepened into trust; events provided opportunities for insight. This allowed Mu Soeng and me to carry out a more dynamic itinerary.

The BCBS model trusts each student to take responsibility for formal study and practice, for embodying the teachings in the world, and for using each of those to refine the other in a continuous cycle. Even though overwhelmed at times, each member of the group was committed to the ideals of curiosity, mindfulness and wisdom. We were all willing to believe that the possibility of freedom exists in every moment.

Justin Kelley has studied with masters in several Buddhist traditions much of the last five years when not on staff at BCBS (2007-2009). He continues Dharma study and leading trips in India and Nepal. 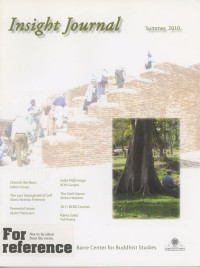 The Last Stronghold of Self

The BCBS Model Goes to India