Once there was a poor boy who happened upon a dead mouse lying in the road. He wondered if he might turn that mouse’s misfor­tune into some sort of opportunity for himself.

With this penny the boy went to the market and bought a very small amount of honey. Then he borrowed a large water pot, filled it with water and carried it into the fields where he knew there were some women picking flowers. It was a hot day, and he offered the flower-pickers a drink of water, each with a drop of honey in it to make it sweet and refreshing. The flower-pickers were grateful, and each gave him a handful of flowers. He sold these in the market, and now had a whole handful of pennies.

Soon afterwards a great storm blew in, bring­ing with it a mighty wind that blew down a large number of twigs and branches from the trees of the king’s pleasure garden. The gardener was scratching his head, wondering how he would clean it all up, when the boy popped up. He of­fered to clean up the entire mess in one day, if he were allowed to keep the wood he collected. The gardener agreed on the spot, greatly relieved.

The clever boy went immediately to the playground and offered the boys playing there a penny each to gather up all the wood and pile it beside the road. They were happy to do so, and had the task done in no time.

Just then a potter who worked nearby was looking for fuel to fire his clay pots in a kiln. The boy offered him the pile of wood, and the potter was delighted he did not have to scavenge wood himself in the forest. He rewarded the boy hand­somely, with a handful of money and several very large water pots.

Meanwhile the boy went to a tavern and befriended both a merchant and a sea captain. From the merchant he learned that a large cara­van with five hundred horses was due to arrive in the village soon.

Using the money he got from the potter, he hired some wagons, loaded his new water pots on them, and filled them with water. He also was able to buy some honey, which he mixed in with the water as before.

It was the season for taking in hay, and at least 500 men were toiling in the fields cutting grass. The boy brought his water to the parched field hands, and in return they each gave him a bundle of grass. He gathered all this grass on the wagons and brought it to the gate of the city, and was there to greet the caravan when it arrived.

The traders had crossed many miles of barren country on their journey, and their horses were famished. They gladly purchased his entire stock of grass, giving him in return from their goods a fine set of clothing, a fancy tent, and a large jew­eled ring.

The boy next learned from his friend the sea captain that a ship was due in port with a rich cargo from foreign lands, and he hatched a plan.

Putting on the fine clothing and the jeweled ring, he had just enough coins left to hire an ex­pensive-looking carriage and driver for an hour. He drove down to the shore to meet the ship as soon as it arrived, with all the appearance of be­ing the son of a very wealthy merchant. He said his father had instructed him to buy the entire ship’s cargo at a generous price, to be paid when the goods were unloaded. He offered the ship’s captain his ring as security for the purchase. The captain was happy to sell all his goods at once, and accepted the offer.

Then the boy drove a short distance off, set up the tent he had gotten from the caravan traders, and promised a handful of coins to three boys if they would help him by acting as his servants. He draped each in a scrap of the fine cloth, and gave them the following instructions. They were told to usher into his presence anyone who turned up wanting to see him, but to do so in three stages. The first boy was to escort the visitor into the vicinity of the tent, the second was to accompany him up to the door, while the third was to usher him in to the presence of the boy posing as a rich merchant’s son.

Before long a hundred merchants went to the dock to buy goods from the ship, but were told by the captain that his entire cargo had already been sold to the wealthy merchant. They fell over one another to reach the boy in his tent, but were made to wait as the “servants” led them one by one to see the “wealthy merchant.” He auctioned off all the goods one by one, making each merchant bid against the others to get what he wanted. The process took a long time, as you might imagine, but the merchants were all so eager to acquire the goods that they drove the prices up very high indeed. By the end of the day the boy had enough money to pay the captain what he had promised him and keep three times as much again for himself.

The boy returned to his village, married the girl he had loved since childhood, and lived a long and prosperous life. He used his wealth to help out anyone in need, and was renowned for his generosity.

It may surprise you to hear such a practical tale in a Buddhist context. In fact the Buddha himself was quite down-to-earth in many ways and, perhaps because so many of his listeners were of the emerging merchant class, he often praises such qualities as industry, thrift and a certain entrepreneurial flair. These qualities are certainly in abundance here, as we follow the progress of this boy’s dealings from the most humble beginnings to great riches.

The key for the Buddha is always that the resources be honestly gained by hard work, and that they ultimately be used not only to support oneself but also to benefit one’s family, friends, community and—most importantly—those in all traditions who strive for liberation from unwholesome states. 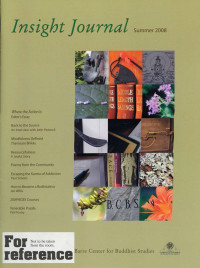 Escaping the Karma of Addiction

How to Be a Bodhisattva

Where the Action Is

Back to the Source