‘Protestant Buddhism’ is a label that has been applied to certain progressive elements in the Theravāda tradition, first in Sri Lanka in the 19th century, and more recently to modernist Buddhism in this country and around the globe. It is sometimes used as a pejorative, to the extent the enterprise is regarded as tainted with orientalist and colonialist attitudes, along with the historical Euro-centrism that led the first western Buddhists to immediately begin the task of “improving upon” the traditional manifestations of Buddhism in Asia. Another point against it is its tendency to downplay or even marginalize the role of the ordained Sangha.

Yet there is also much to be said in favor of modernist trends in contemporary Buddhism, and I wonder if we might find a way of rehabilitating Protestant Buddhism to the satisfaction of its critics. A crucial first step in the process is to recognize that new forms of Buddhism, at their best, are based upon creative ways of synthesizing meaning rather than upon undermining the beliefs or practices of others. In other words, while it is not okay to say others have got it wrong and this is the right way of looking at things, it is entirely appropriate (even natural) to say “Here is an interesting new way of understanding things that I find particularly meaningful.”

Let’s look at some of the parallels. In ancient India the Brahmins held specialized sacred knowledge of the Vedic hymns, and were the only ones qualified to perform the rituals needed for the well being of the population. The entire Śramaņa movement was a rebellion against this privileged information, and the Buddha, like other wandering ascetics, taught that anyone can gain direct access to spiritual understanding by practicing meditation and understanding the Dhamma for themselves. This is much like the Protestants in Europe by-passing the Church and empowering people to study the Bible for themselves and forge their own meaning from it directly.

Over twenty-five centuries an orthodox Theravāda establishment grew and flourished in many Buddhist countries, built upon a preservation of the Pāli texts and their explication in commentaries such as those by Buddhaghosa. The monks (and nuns?) had direct access to the teachings through the study of Pāli and the practice of meditation, while the laity was cast in a supporting role of sustaining the monastics and practicing generosity and ethical behavior. In the twentieth century some Burmese teachers encouraged householders to practice meditation intensively on ten-day retreats, thus making the insights deriving from such practice directly available to them. This is one of the forms in which Theravāda Buddhism was imported to the West, where such regular meditation practice became popular among convert Buddhists.

Another development that gained momentum over the course of the twentieth century was the study of Buddhist texts and languages, including the complete translation of the Pāli canon. Good editions of these texts are now readily available to all in the English-speaking world, and even tools for learning Pāli are within easy reach. While we have not quite arrived at the point of finding a copy of the Dhammapada in one’s hotel room drawer, certainly almost every bookstore carries some selection of primary Buddhist texts, with many freely available on the internet. And people are reading them.

One of the more foundational insights of Buddhism, aligning it with the post-modern world view, is that a world of meaning is constructed anew each moment by each individual mind/body organism. The “world” is not “out there,” but is constructed in “this fathom-long body.” As information flows into the various sense doors, mediated by the structures of our sensory apparatus and the functions of our mental aggregates, views form about who we are and what sort of environment we inhabit. These views are often mistaken (distorted by delusion, clouded by defilements, and beset with ignorance) but we do the best we can each moment to gradually clarify and deepen our understanding. The process is aided by both hearing the Dhamma (or, nowadays, reading it) and investigating its meaning in personal meditative experience.

This being the case, having direct access to the teachings of the Buddha, and being encouraged and supported in the regular practice of meditation, can only be a good thing. Even if we get it wrong once in a while, better to be actively inquiring into the meaning of the Dhamma at every opportunity than to passively accept a tradition in a given form. How many times has the Buddha said “Listen carefully, and I will speak…,” and how many times do we find the phrase “Here are the roots of trees. Meditate!”

Care must be taken to avoid the pitfalls. We are not necessarily better at understanding these teachings than all the Buddhists before us just because we are moderns or westerners or humanists or typing on keyboards. We cannot assume that the troubling bits, about miracles, rebirth, and hell realms, for example, must not be “true” and that we, of course, know better. It is possible to hold the greatest respect for all those who think differently than ourselves, for all those who construct their own meaning of these teachings differently than we do, and simply say at some point that we are not capable of seeing it that way. There is a huge difference between thinking differently from another and considering the other to be mistaken.

So by all means let us keep reading the texts, very carefully, and see how creatively and meaningfully we can allow the teachings they contain to guide the way we live our lives and shape our world. Let’s also engage in the careful investigation of experience, moment by moment, and allow the insights so gained to inform and inspire our understanding. As part of this practice, let us be very watchful over our own attitudes to ensure that toxins such as pride, intolerance, or prejudice about other opinions do not spill out and reveal how much work has still to be done. And, let’s continue to honor and learn from the Elders. 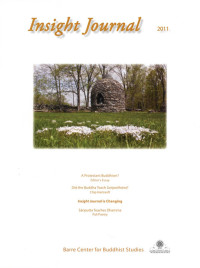 Did the Buddha Teach Satipatthāna?