When the Buddha and His Mother Were Elephants 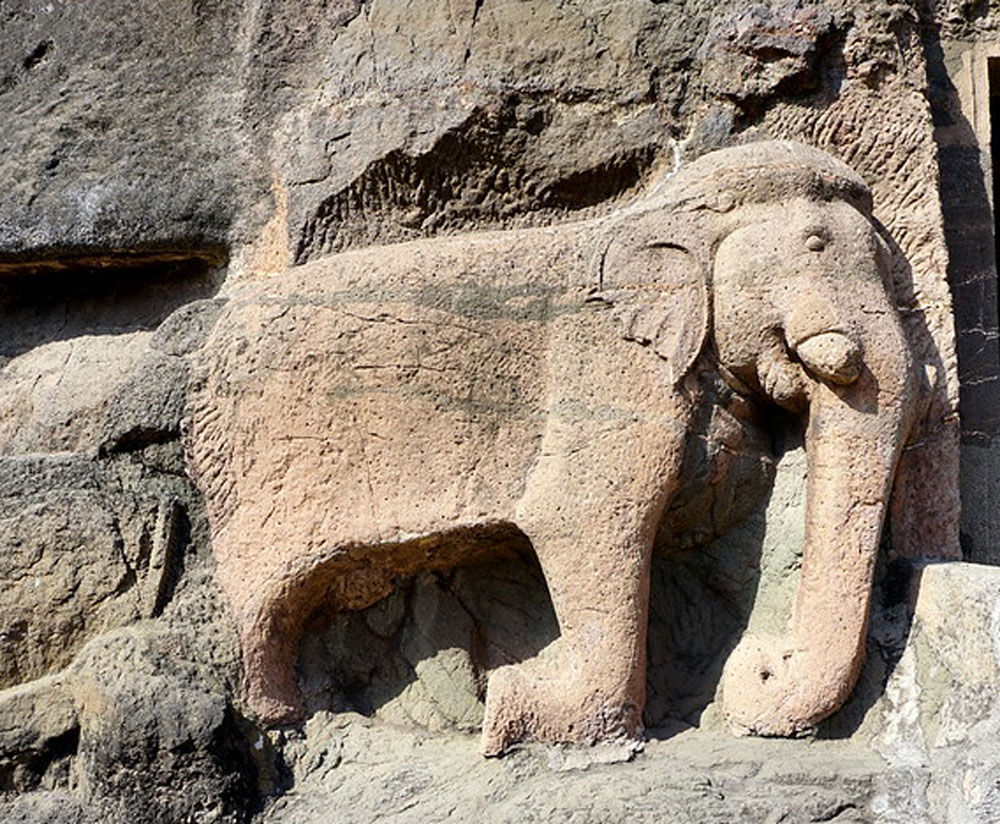 The monks said to the Buddha, “Lord, do you see what we see?  How did Mahapajapati Gotami who had become blind out of grief over you, become no longer blind after having come close to you?”  The Buddha said, “Monks, this is not the only time that Mahapajapati Gotami has become blind by crying with grief over me, but after having come close to me, she was no longer blind.  There was another time that this happened.”  The monks said, “Really, it happened another time?”  and the Buddha said, “Yes, there was another time.”

The monks said to the Buddha, “Lord, do you see what we see?  How did Mahapajapati Gotami who had become blind out of grief over you, become no longer blind after having come close to you?”  The Buddha said, “Monks, this is not the only time that Mahapajapati Gotami has become blind by crying with grief over me, but after having come close to me, she was no longer blind.  There was another time that this happened.”  The monks said, “Really, it happened another time?”  and the Buddha said, “Yes, there was another time.”

“Long ago, Monks, at some point way in the past, there was a mountain named Candagiri that was in the foothills of the Himalayas.  There was a large forest that covered the side of the mountain, dense with thousands of trees that were themselves covered with flowers and fruits.  That forest was remote and lonely, but it was filled with lotus ponds and ashrams and groups of rishis came there to do their ascetic practices within it.

“A herd of elephants also lived there, all of them of the kind that has six tusks.  A thoroughbred elephant baby was born in that herd, and he had six tusks, red hair on his head, and the complexion of a white lotus; moreover, the seven bodily parts distinctive to an elephant were all perfect.  As he grew up, he waited on his mother with the respect due to a teacher and with love.  He gave food and drink to her first, and only ate afterwards himself.  He routinely cleaned and bathed her highborn body using a forest vine.  And so that elephant calf grew up, continually waiting on his mother with a sense of being taken care of, and with love, and respect.

“Sometimes, after he had bathed his mother and waited on her, and after he knew that she was lying down, he went outside, going about together with a group of elephants.  On one of those times, he was seen by some hunters as they chased their game who went to the king of Kashi and reported what they had seen, ‘Your Majesty, an elephant calf of such a sort, gracious and beautiful, lives in the forest out there.  He is fit for a king.’

“Monks, the king of Kashi listened to what his hunters told him.  He then went with his army to that forest with his army, and he captured that young elephant.  He was brought to Kashi, surrounded with an escort of female elephants.  Once there, he was bathed in the elephant stable.  The king had this thought: ‘This one will be a beautiful mount for me.’ He treated the elephant well in every way.  He made all kinds of promises to him.  The king even gave the elephant his own food and drink.  The king’s kindness did not please the elephant who sighed deeply whenever he remembered his mother with grief and his tears fell; the elephant languished and grew faint.

“Out of his affection, the king greeted the young elephant with honor and asked him: ‘Greatest of elephants, I honor you in every way, but all the same you languish, grow weak, and do not thrive.  I never see any vitality in your skin-color or in your body, I never see any happiness, I never see you with a smile on your face.’  Tell me about it, explain to me how to help you to get over whatever it is.  Best of elephants, you are dear to me, pleasing to me.  Tell me why you have grown so weak, and never take any food or drink.’

“Then the young elephant replied in human speech to the king’s question: “Your Majesty, it’s neither care nor food that I need.  My mother lives back in the forest out there.  She is old, aged, her strength is gone; she can’t see and her body is weak.  I cannot remember a time, from the time I reached maturity, that I ever ate of drank anything without having first given some to my mother.  This is my vow, “I shall die right here rather than eat or drink something first to my mother.”’”[ how to do punctuation here?—three quotation marks]

“The king of Kashi was righteous, kind, always ready to care for others.  He said to himself, ‘This is incredible to see.  This young elephant’s concern for his mother is both righteous and natural, and for so many days he has neither ate or drank out of grief for his mother.  These good qualities that this young elephant has are very rare among humans.  It would not be right nor fitting if we were to harm such a beautiful being as this.’

“Then the king said to his chief ministers, ‘Free this young elephant, let him go back to the forest where we captured him.  He is someone who cares for his mother, so let him be re-united with her.  Don’t let him die here from starvation, turning us into sinners for no reason [or making us unrighteous].’  Thus, by the king’s command, the young elephant was brought to the forest and set free.

“The elephant went into the forest but he did not eat or drink.  He only searched for his mother.  His mother was crying out of grief and not seeing her son, she had become blind.

“When the young elephant could not find his mother, he climbed to the top of a mountain and cried out loud.  As he was crying out in this way, his voice was recognized by his mother, and she cried out too, as she realized ‘This is the voice of my son.’  Then he recognized the voice of his mother and he immediately went to where she was.

“He found his mother sitting right at the edge of a large lake. Blind, she was going in circles, her body was covered in dust. She was right where she was when she heard the sound of her son’s voice.

“The young elephant broke off some very soft vines and cleaned his mother, getting the dust off her body.  Using his trunk to bring water, he washed her, and as he did so, he was glad and happy, becoming loving and joyous.

“He bathed her body and washed out her eyes, removing all the dirt that was in her eyes.  She became clear-sighted once more.  As soon as she was able to see her son, she herself became loving and joyous.  She asked him, ‘Child, where did you go?  I was abandoned, left in a state where no one defended me and I couldn’t fend for myself.’

“He told his mother the key things that happened in every detail, from when he was captured to when he was freed.  She said to her son, ‘Child, may the king of Kashi and all who surround him rejoice in just the same way as I am rejoicing after seeing my son today.’