How many ways are there to...how do I put it? Study Buddhism? Understand the dharma? Train in the sasana? Ex­plore the Buddhist tradition? Follow the path? Engage in Buddhist Studies? Inquire into the nature of reality? You see the problem already. There are a lot of ways of going about doing whatever-you-call-it, and what you call it makes a significant difference to what you actually wind up doing. The word "Bud­dhism" itself, as we are all no doubt aware, is a modern word. It is an … END_OF_DOCUMENT_TOKEN_TO_BE_REPLACED

Cullavagga V.6 This less-well-known mettā verse has its origins in an ancient, probably pre-Buddhist, snake charm. It is taught by the Buddha in the Vinaya in response to his hearing of a monk who perished after being bitten by a snake. The first stanza, not translated here, extends loving kindness to the four main groups of snake deities. The Buddha tells the monks that if they adequately develop loving kindness to these snake deities, they will be free of harm from snake … END_OF_DOCUMENT_TOKEN_TO_BE_REPLACED

How did you first become interested in Buddhist practices? I first began my practice in the Tibetan sedition in 1970. By a strange set of circumstances I ended up in India at 17. Totally culture shocked, I sat in a dingy hotel room in old Delhi and won­dered how quickly I could get out of India. An old India hand advised me to head for the mountains to recover be­fore I fled. Arriving in McLeod Ganj, the home of the Dalai Lama and a large settlement of Tibetan refugees. I was stunned by the … END_OF_DOCUMENT_TOKEN_TO_BE_REPLACED

(Adapted from a workshop at BCBS on November 20, 1993) Meditation on death awareness is one of the oldest practices in all Buddhist traditions. In the words of the Buddha, “of all the footprints, that of the elephant is supreme. Similarly, of all mindfulness meditation, that on death is supreme." The Tibetan Book of the Dead was one of the first and most popular books to attract the attention of Buddhist practitioners in America in the nineteen-sixties and seventies. The tremendous popularity … END_OF_DOCUMENT_TOKEN_TO_BE_REPLACED 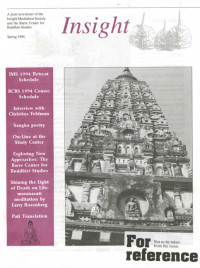