This highly alliterated poem, attributed to the elder monk Culaka, plays with the prefix su-, which occurs no less than 14 times in these two short stanzas. It has three primary meanings, covered successively through the poem: 1) lovely or well-formed, 2) good, thorough, or well done, and 3) it is often used as a simple intensive prefix, meaning very- or most-.

The plaintive call of the peacock, commonplace during the 3 month rainy season retreats undertaken by the Buddha’s monks and nuns, is a favorite theme of their nature poetry preserved in the Theragatha and the Therigatha.

The first stanza reflects the balanced appreciation of the natural world that comes from the focused but equanimous mind in meditation. Pleasurable sensations, such as the ones described here in response to the beauty of nature, can be experienced mindfully by those devoid of craving, without the tendancy present in most of us to cling to the pleasure or resist its inevitable passing away. Early Buddhist poetry often points out the beauties of nature, but seldom lingers on them.

The second stanza leads one on to higher aspirations. It inspires the listener (for this was primarily an oral tradition) to give up the mundane pursuits of the worldly life, engage in the purifying and clarifying enterprise of meditation, tread diligently the straight path pointed out by Buddha and, finally, attain in this very lifetime the perfection of the human condition. 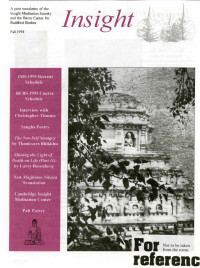 An Unabashed Enthusiasm for the Here and Now

The Call of the Peacocks