Issho Fujita is a Japanese zen monk who has been the resident teacher at Valley Zendo in Chariemont, Western Massachusetts since 1987. This article is extracted from a weekend work­shop offered at the Barre Center for Buddhist Studies in March 2000.

My interest in studying this Pali text is an attempt to go back to the Buddha himself. Of course, we don’t know exactly what he said. But according to most scholars the Pali texts are the earliest avail­able teachings of the Buddha. And the Sutta Nipāta is considered to be one of the oldest, if not the oldest, of the scriptures in Pali.

My interest is also in finding out what was the basis of the Buddha’s understanding. I don’t think the Buddha had an interest in teaching a philosophy or teaching a point of view. The way I look at these texts, the Buddha seems to be responding to each situation, each person, each question that was asked of him. In each case it was a spontaneous response—something like when you touch two electric wires together and there is a spark. These teachings are very alive in the situations in which the Buddha was teaching. Later on, people extracted some philoso­phy and doctrines from his teachings and made them quite a bit abstract.

Without the scriptures, there is a danger of relying too much on our own experience and creating our own interpretation that may or may not be true.

American Buddhism tends to be very intellectual, and people are always trying to find theories and philosophical systems of “Bud­dhism.” There are all kinds of books that have chapters and headings about Buddha’s teachings, but I think if the Buddha were to look at such books he would be embarrassed. Thought is part of life, but it has too much power. So we have to shift our thinking to look at how we think, and to examine what our thoughts are all about. If our thinking is supported by thoughts of “dependent origi­nation” or “non-clinging,” it takes away the power of thought that operates on a subconscious level.

For me, the interest in knowing the Buddha as he originally was and how he taught has been fostered through my own Zen back­ground. Many Zen teachers teach the same way, in a spontaneous manner. They tell a number of stories to illustrate their point. Some people listen to their talk expecting to get some philosophy or some idea out of it, but soon they get lost. But for those who are able to listen to those talks without any expectation, there is a spark.

It is the same kind of spark that happened to people when they met the Buddha and asked him a question. When the Zen teacher meets with a student on a one-on-one basis or in a group, he is not trying to teach dependent origination, or the four noble truths, or anything that might be called “Buddhist philosophy.” He is re­sponding directly to a concrete situation. He is not using the same style or approach in each of his interactions with other students as a formula. Each time it’s a unique response to a unique situation. 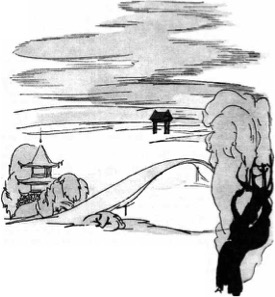 There is a story of someone coming to a Zen mas­ter and saying that he had read tens of thousands of words on Zen, but could not find true Zen in there. The Zen master re­plied that if he wanted to find Zen in words, he was never going to find it. Another Zen master said that the entire Tripitaka [the Buddhist Canon] was good only for wiping your ass! So the tradition of Zen has always relied on real life situations for teaching purposes, in a direct encounter between a teacher and a student. In those situations, abstract philosophy is not very helpful.

In the Sutta Nipāta we also find a number of dialogues between the Buddha and others which seem to be parallel to the kinds of situations Zen masters respond to. This text does not de­pend on philosophical teaching, but is trying to discern what is being asked of the Buddha. So in order to understand this text, we have to put aside our desire to find some philosophical system. We have to try to hear what is actually said, and what is actually taking place.

The Aṭṭhaka-vagga chapter was translated in Chinese, but it always remained a very minor part of the Āgamas [the texts in the Chinese canon corresponding to the Pali texts] and not much attention was paid to it. That may be due to the fact that Mahāyāna Buddhist scriptures tend to see the Buddha as more transcendental, whereas Pali suttas are more historical—they tell us where the Buddha was staying, who he was talking to, and so on.

Many of the early Chinese masters wanted to understand the original teachings of the Buddha, but since they could not read Sanskrit or Pali it was very difficult to do so. Instead, they tried to connect with the mind of the Buddha through meditation. Dogen said that he was teaching Zen, but what he was transmitting was the Buddhadharma. He had this faith that what he had understood through his practice was directly from the Buddha mind. Scholars may object to this kind of transmission, but it was Dogen’s faith. And in religious understanding, faith matters a lot.

For people like myself in our time, it is so helpful to have translations from Pali and Sanskrit and Tibetan, and to be able to compare them. It allows us to have a more direct understanding of the original teachings of the Buddha. It provides us with the raw material, without the philosophical interpretations that came later on. The value of having this kind of raw material is that scriptures provide us  with some understanding of our experience. Without the scriptures, there is a danger of relying too much on our own experience and creating our own interpretation that may or may not be true.

It is only taking these factors as the means and not grasping them as ends in themselves that one so attains and consequently does not crave for re-becoming.

The basic structure of the koan forces us to think in a way that is beyond thinking or non-thinking. Not-thinking can be a certain kind of thinking that gives us deep insight, and I think this is what this text is trying to present us with. If we are living our life through thinking, we get confused. Think­ing is a product of our desire to be satisfied about something. If we live our life through thinking, we are living only half-way, and our life is always half-finished, half-satisfied. Even our dreams are a product of this half-living, because they are telling us something is not finished; we need to finish them. But if you are living fully through not-thinking, then there is no need for dreams. We dream out of unfinished business.

These verses are not saying that we should stop having desires. That would be impossible so long as we have our minds and bodies. But what they are saying is that we should examine these desires and the true nature of desire, so that we are not driven by desire or controlled by the work­ing of desire. We are driven by desire only because we don’t know the nature of de­sire. Any thought is just a result of some subtle pre-conscious processing. What medi­tation tells us to do is to just let the thought arise and let it subside on its own. But we cling to thoughts that we think are “good” and push away those that we think are not good. We can be just mindful and equanimous when dealing with our think­ing and thoughts.

That attitude is the main point of this chapter. We don’t actually have to try to be anything. If we try not to cling, that in itself is a kind of clinging. Our experience of sit­ting on the cushion and paying attention is that we can have a deep understanding of what the Buddha meant by non-thinking or non-clinging.

In Zen tradition there is the metaphor of crystal; when you put the crystal in the middle of the room, it reflects whatever is around it. It reflects both the ugly and the beautiful. It has no resistance of any kind. We can train our minds to be like the crys­tal, reflecting everything without resistance. Clinging means a preference for reflecting only one kind of thing that we like.

In the same way we can use the texts like a crystal to reflect back on how we actually are right now. It’s the opposite of wanting the texts to confirm our own already distorted perspectives on things. That’s why it’s scary to put our trust in the texts, because the texts will require us to be open and to change as a result of whatever un­derstanding may arise for us. We read the texts not to satisfy ourselves, or to look for a statement that sounds nice. Rather we have to look for a statement that shakes up our foundation.

Mostly I read Zen texts or Chinese texts from the Tendai school, which tend to be very philosophical. This is the first text I have read from the Pali tradition, and I find it very refreshing in that it is not philosophical at all. It’s not asking us to think about “What is the meaning of it?” or “What do I have to do?” It is simply asking us to be in accord with what it is saying, to live our lives like this. 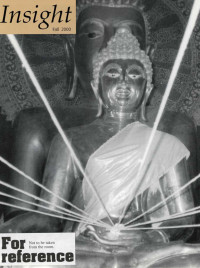