Let no one work to undo another
Since all of us must act in the world at all times (even refraining from action is a form of action), this line of verse asks us to take care that the actions we undertake do not work against or come into conflict with the work of others. It reminds us of a phrase once used by the Buddha: “I do not quarrel with anyone in the world.” Both phrases evoke a sense of non-interference, of taking care of one’s own domain of activity in ways that do not seek to undermine what others are doing.

Of course this is not to be taken as a directive to acquiesce to acts of harming or cruelty, or to be saying that the strong should be allowed to dominate the weak as they please. In keeping with the Mettā Sutta as a whole, the phrase rather emphasizes the quality of intention with which one undertakes action. It is an injunction against things like jealousy, envy, resentment, spite, and the many other emotions that provoke us to subtly or overtly try to thwart the plans and aspirations of others.

In practice I see this as a thought we can return to again and again to check in that we are working in positive rather than negative ways. How might we seek to build up what is needed, rather than tear down what others are doing or have done? There is plenty of good work to be done, plenty of ways we might make ourselves, our lives, our communities and our world a better place. Let’s allow others to make their own contributions without our undercutting them, and focus instead on building wholesome karma and performing wholesome acts.

Let no one think badly of anyone
The same sentiment is now applied to the realm of mental action, not just physical action or speech. Even to think thoughts rooted in aversion to others is an unwholesome thing for us to be doing. Buddhist ethics are not about restraining outward behavior while seething inwardly, but are about the thoroughgoing transformation of the very sources of the motivations of behavior. It is not about pretending or appearing to bear no enmity toward others, it is about really not giving rise to enmity in the heart at all.

The Mettā Sutta is trying to show us a radically different way of being human. Yes, we have instincts driving us to react aggressively or hatefully when crossed or thwarted in some way by another. But our first response is not necessarily our most noble response. We can use our understanding to gain a broader view of what is happening, which allows for the emergence of a wiser, more kind and compassionate response.

Even the most heinous criminal can be the recipient of our compassion, for (as we are coming to understand ever better these days) that person’s personality and that particular action have their roots in a whole network of interdependent conditions shaping them. A hurtful person has learned to be hurtful by being raised in a hurtful environment, and commits hurtful acts when her or his natural sense of conscience and respect for others has been eclipsed by ignorance and confusion. It is not that a harmful act is to be forgiven; it is to be understood. It is not that the person deserves to be thought badly of by us; we diminish ourselves when we think badly of others.

From this perspective there is really no reason to ever think badly of another, or as the Pali more literally puts it, there is never a good reason to place the mind against another person. The entire enterprise of “setting oneself against” another, in action, word or thought, is antithetical to the message of the Mettā Sutta, which is trying instead to bring people into harmony with themselves and with one another.

Practice: Pay attention to the thoughts you have about others, and notice when they are laced with some sort of judgment, criticism, or attitude of aversion. See if you can separate in your experience the reason for the aversion (this thing she did was wrong) from the sentiment you have for the person herself. Can you manage to replace the feeling of subtle hatred for one with loving kindness, even though they have done something of which you don’t approve?

Either with anger or with violent thoughts
These are two of the common forms our thoughts of others can take, and they are singled out here for particular attention. Both are manifestations of hatred, the antithesis of mettā or loving kindness.

Anger can be explosive and aggressive, as when we “lose our temper” or erupt in a rage. Or it can be very low-grade, manifesting as a sort of seething discontent or as passive modes of aggression. It is probably the most common expression of the primal root of hatred, especially if we include in its camp such emotions as annoyance. It is present any time we “don’t like what is happening” and want things to be different than they are. It is a moment out of synch with what is actually occurring, and as such anger is generally a fairly pointless expenditure of energy. Again, there may be issues of injustice that give rise to anger, but the point here is that one can work toward alleviating that injustice with or without anger, and doing so without anger is always healthier.

We generally think of violence as an action, but here the sutta is referring to it as a thought or a perception. At its heart violence is “striking against” something. Of course this can be striking a living being with a stick or other weapon, but at its most basic level of meaning we may well be “striking against” others much of the time when we think a critical or hateful thought about them. Even if a stick is not involved, we might be striking them with our righteousness, or with our condemnation, or even with our own pride. Surely we have better things to do with our mind in this precious human birth, implies the sutta.

Practice: Notice when anger arises. Notice when violent (even slightly aversive) thoughts arise. That is all. Noticing when these things happen is a huge step in itself. One might go on to say “having noticed their arising, abandon them and work to so transform yourself that they never arise again,” but I think noticing them is enough of a good start. Letting go would be good too.

Loving kindness is a quality of the heart that is immediately accessible to all of us all the time. When we are not manifesting it at any given moment, it is likely to be from negligence, or distraction, or the force of habit or circumstance. The Mettā Sutta in this verse is helping us to recognize those moments when we wish ill upon others, or think badly of others, in order to retrain the mind to let go of such ways of being and open to the more altruistic qualities of mind that are also part of our human inheritance. It is simply a matter of noticing what is actually going on in our experience, understanding what is unwholesome and wholesome, and then letting go of what is harmful in order to take up and develop what is helpful.

And let’s also remember the context of this phrase, for it points back to the very first stanza of the sutta. One would not wish suffering on others if one were skillful in what is good or if one were reaching toward that most peaceful state. Holding a benevolent attitude towards other people is both a prerequisite of developing wisdom and an expression of that wisdom once it is developed. 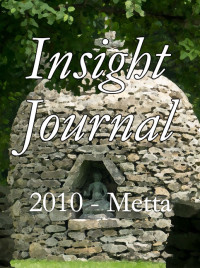