But one whose wisdom is wide as the earth
Is not born over and over,
For he’s gained the path
Of not becoming over again.

The composers of Pali poetry love to play on words-puns, alliteration (see lines 3,6 & 7), and double intentions abound in the verses that have emerged from the lost world of ancient India. This poem is unique in its thorough repetition of the first phrase, which sets the tone of cyclical activity that drones on and on until the pattern is transformed. Even the pronunciation of punappunaṃ contributes to this: The first two syllables rise up in tone, a pause or break occurs at the double “p’s, “ and then the other two syllables descend (much like we would say in English something like “Is born, then dies.”)

Beginning with the cycles of nature and the on-flowing of the growing seasons, the poet (after tying in the rewards of generosity) turns the metaphor of re-turn to the essential Dhamma teaching of the cycles of birth and death that make up saṃsāra, the flowing-on of the deluded from one womb to another. (The “seeds” planted in the first stanza, also meaning the choices we make, are bearing karmic consequences in the third.) Mando (line 10), or confusion, is the narrow limitation of mind that prevents our insight into the impermanence, selflessness and unsatisfactoriness of ourselves and the world. It is transformed by the sort of wisdom that is as far-reaching, tranquil and stable as the wide earth itself–capable of holding everything with equanimity.

The entire poem is about that central Buddhist idea punabbhava, found in the final stanza, which is often translated as “renewed existence“ or even “again-becoming.” In the process thinking that so characterizes Buddhism, people and things do not “exist” as much as they “become,” and this more dynamic form of the verb “to be” is usually preferred in the literature. This life we cling to is merely an episode in a much larger drama of perpetual birth and death, with existence recurring “over and over,” and we will never sort it out until we are capable of holding this wider view of our situation. 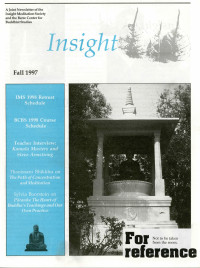 Sharing a Vision of Practice

The Path of Concentration and Mindfulness

The Pāramis: Heart of Buddha’s Teachings and Our Own Practice