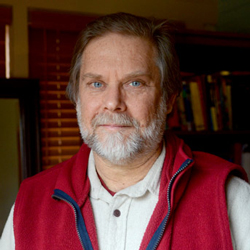 David R. Loy is especially interested in the conversation between Buddhism and modernity. His books include A New Buddhist Path, Ecodharma: Buddhist teachings for the Ecological Crisis, Nonduality, Lack and Transcendance, A Buddhist History of the West, The Great Awakening, Money Sex War Karma and The World Is Made of Stories. A Zen practitioner for many years, he is qualified as a teacher in the Sanbo Zen tradition.