BCBS is located in central Massachusetts, about 2 miles north of Barre center. By car, we are 50 minutes northwest of Worcester, MA, 2 hours west of Boston, and about 4 hours northeast of New York City. There is no public transportation service directly to Barre.

From Vermont and northwestern Massachusetts

Take Route 2 East (exit 27 off I-91) to Route 122 South (exit 15). Follow 122 South to Barre Center (about 18 miles). As you approach the Barre Town Common, turn left onto Pleasant Street where Route 122 makes a sharp right. Don't take this right turn. Then see "From Barre Town Common" below. 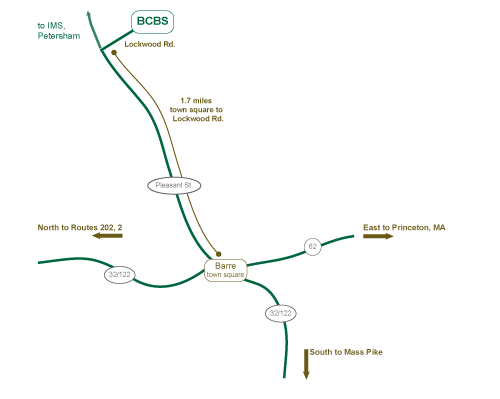 If you need a ride or can offer a ride to or from BCBS, please visit the BCBS/IMS ride share page, available to folks enrolled at BCBS or IMS, an affiliated center just down the street. While you're welcome to preview rides needed or offered, you'll need a password to post or coordinate a ride, which you can find in your registration confirmation.

By Bus or Train

Take a bus or train to Worcester, MA via:

If you're not staying at BCBS for your program, we recommend you stay at one of the places listed below. When making your plans, please keep in mind that deposits might be non-refundable. From BCBS, the bed & breakfasts and campground are within a 5-20 minute drive, and the hotels are within a 30-40 minute drive.

For information about places to stay nearby, please visit Local Lodging