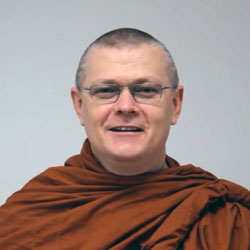 Bhikkhu Sujato was ordained in 1994 as a Theravāda monk in the Thai forest lineage of Ajahn Chah.  He lived as a monk in Thailand for some years and then returned to his native Australia, serving as abbot of Santi Forest Monastery, which he founded in 2003.  Bhikkhu Sujato is also the co-founder of SuttaCentral, which offers freely available translations of the four Nikāyas, as well as the author of numerous books on early Buddhism.  He has worked to revive the full ordination of nuns in Theravāda traditions and is particularly interested in exploring the path of the Buddha in a time of climate change, globalized consumerism, and political turmoil.