There are generally two approaches to understanding the relationship between the mind and the brain. By mind we mean the subjective side of things, the full range of lived experience, both conscious and unconscious, including such things as thought, cognition, memory, desire, emotional states, and even perhaps the sense of transcendence. By brain we refer to the objective side, the physical stuff between our ears, with its complex architecture of inter-related neurons and the electro-chemical processes activating and connecting them.

One approach regards the two as basically identical. In this view all subjective experience not only depends upon but also consists of brain activity, and when we have fully mapped out the functions of the brain we will have explained the mind. The other approach considers the mind to be much more than the brain, extending far beyond the merely physical in both scope and capability in ways that the current scientific models either have not yet conceived or are just beginning to glimpse. In this view there are of course parallels between brain activity and subjective states, but the one does not entirely explain the other. Traditionally (both east and west) this non-physical perspective on consciousness involved notions of immaterial soul or higher modes of consciousness that are outside the matrix of physical cause and effect. This view has been steadily retreating before the advances of neuroscience, but recent iterations of it are looking to the new physics for ways of articulating a deeper and more fundamental relationship between mind and matter than formerly imagined.

In Buddhist terms the question comes down to whether all consciousness is conditioned, as the consciousness of the grasping aggregates surely is, or whether consciousness might also be conceived in larger, even unconditioned, terms. Such is the case in some of the later forms of Buddhism, like the Mahāyāna and Vajrayāna, but there are many in the Theravada who see it this way as well. The issue turns on how we construe the word “unconditioned” (asankhata), which is regularly employed as a synonym for nibbāna. If everything is conditioned and nibbāna is the one state that is unconditioned, then surely awakening consists of at least glimpsing if not deeply experiencing a form of consciousness well beyond conditioned phenomena and thus beyond the mere brain. On the other hand, the term “unconditioned” is most plainly defined only as the absence of greed, hatred, and delusion (as in the Asankhata Samyutta, S43), consciousness is specifically declared to be conditioned (Majjhima 38) and nowhere, at least in the Pali texts, do we find the (oxymoronic) phrase “unconditioned consciousness.”

Either some are making too much of consciousness, or others are making too little of it. As I understand the early teachings, the Buddha was trying to steer us to a middle way of approaching this issue, a way between what he called eternalism and annihilationism.

It is equally tempting to want to reduce something we do not understand very well yet (consciousness) to something we do understand (matter). But the inadequacy of our conceptual tools does not necessarily constrain the phenomenon itself. The example that comes to mind from the texts is of the man who inquires about a fire that has just been extinguished: “To which direction has the fire gone, the east, west, north, or south?” (Majjhima 2) The problem with simply reducing mind to brain is not only that the teachings about rebirth are challenged, but the scope and promise of awakening seems somehow reduced to accepting one’s death rather than transcending it in some remarkable way. Did the Buddha merely die happily, or did he in some important sense overcome life and death and attain the Deathless?

I suspect our challenge lies not in choosing one horn of this dilemma over another, but in learning how to understand consciousness in a new, middle, way. One step toward the center might be to remove the word “merely” from a physical description of brain activity, such that a material explanation might not bring with it a sense that mind is “reduced” to something of lesser value. Another step in from the other side might involve the recognition that mind, if it be conceived as an emergent property arising from the neuronal activity of the brain, nevertheless virtually creates a higher order of meaning than anything else in our natural world. Even if consciousness is conditioned, it may still be something very special.

In the early texts the Buddha seems to regard the mind and the brain as fundamentally interdependent, each conditioned in experience equally by the other. He describes it in objective terms, as consisting of impersonal, interdependently arising bases, aggregates and elements, none of which, because of impermanence, themselves survive from one day to the next, let alone from one life to another. Yet he also describes the incomparable value of engaging, investigating, and understanding the living experience of moment-to-moment consciousness, from the inside, and guides all of us in that enterprise toward an experience of inexpressible transcendent meaningfulness. These two views may not be antithetical. 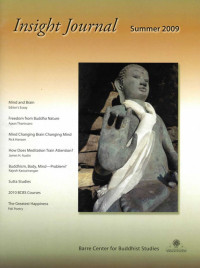 How Does Meditation Train Attention?