The tendency in human nature to discriminate against people because of their skin color, social standing or birth, and to consider one racial group to be more pure than another, is probably as old as mankind itself. Racism was alive and well in ancient India, where pale-skinned Indo-European brahmins placed themselves at the pinnacle of a caste system that included nobles, merchants, workers and the universally denigrated outcasts.

In this discourse the Buddha offers a series of cogent arguments against this indefensible view. The first and most compelling of these is simply asking, “On the basis of what might one regard oneself better than another?” He then proceeds to offer objections raised from the perspectives of biology, ethnography, the laws of karma (which treat all people equally), psychology, common sense, physics, genetics and social custom.

The brahmins, of course, are shown up to have no legitimate basis for their assumed superiority, which is called by the Buddha simply a “pernicious view.”

By the end of the discussion we are told that the brahmin Assalāyana “sat silent and dismayed, with shoulders drooping and head down, glum and without response.”

The Buddha’s own view on the matter is of course quite different. Since a person most fundamentally is to be understood as a selfless, dependently arisen confluence of five aggregates, processing transient phenomena through six sense doors in a moment-to-moment construction of virtual experience, the matters of skin color, race, social status and even gender are of relatively little consequence.

He is famous for insisting there be no caste distinctions in his sangha of monks and nuns.

A very interesting issue is raised in this exchange with bramins in the additional story: How do we understand ethnicity and caste in light of the teachings around rebirth? Is the “being to be
reborn,” whether construed as a soul or as a bundle of dispositions, in any intrinsic way a member of a caste? I think the Buddha points out here how utterly secondary such distinctions are.

In the end, the Brahmins are reduced to admitting that they are not really very clear at all about who or what they are. This is good, for it is only after we unlearn our prejudices that we can begin to learn much about the Dharma.

On one occasion a large group of brahmins from diverse provinces were staying at Sāvatthī for some business or other. Then those brahmins thought: “The recluse Gotama describes purification for all the four castes. Who is there able to dispute with him about this assertion?” So the brahmin Assalāyana went with a large number of brahmins to the Buddha and said:

What does Master Gotama say about that?

On the strength of what, or with the support of what, do the brahmins say this?

Now, Assalāyana, the brahmin women are seen having their periods, becoming pregnant, giving birth and giving suck. And yet those who are born from the wombs of the brahmin women say thus: ‘Brahmins are… the offspring of Brahma….’

Have you heard that in Yona [=Ionia; i.e., Greece] and in other outland countries there are only two castes, masters and slaves, and that masters become slaves and slaves become masters?

Suppose a noble were to [misbehave ethically]. On the dissolution of the body, after death, would only he reappear in…an unhappy destination…, and not a brahmin?

Suppose a brahmin were to [behave ethically] on the dissolution of the body, after death, would only he reappear in…a happy destination… and not a noble, or a merchant, or a worker?

Is only a brahmin capable of developing a mind of loving-kindness towards a certain region, without hostility and without ill will, and not a noble, or a merchant, or a worker?

Is only a brahmin capable of taking bath powder, going to the river and washing off dust and dirt, and not a noble, or a merchant, or a worker?

—He could be called both, Master Gotama.

Suppose a mare were to be mated with a male donkey, and a foal were to be born as the result. Should the foal be called a horse after the mother or a donkey after the father?

—It is a mule, Master Gotama; since it does not belong to either kind. I see the difference in this last case, but I see no difference in either of the former ones.

Suppose there were two brahmin students who were brothers, born of the same mother, one studious and acute, but immoral and of bad character, and one neither studious nor acute, but virtuous and of good character. Which of them would brahmins feed first at a… feast?

—On such occasions, brahmins would feed first the one who was neither studious nor acute, but virtuous and of good character, Master Gotama; for how could what is given to one who is immoral and of bad character bring great fruit?

The Buddha then tells a story in which a group of brahmins who make a similar claim to superiority are asked by a sage the following questions:

Sirs, do you know if the mother who bore you went only with a brahmin and never with a non-brahmin? —No, sir.

Sirs, do you know if your mother’s mothers back to the seventh generation went only with a brahmin and never with a non-brahmin? —No, sir.

Sirs, do you know if the father who begot you went only with a brahmin and never with a non-brahmin? —No, sir.

Sirs, do you know if your father’s fathers back to the seventh generation went only with a brahmin and never with a non-brahmin? —No, sir.

Then, sirs, do you know for sure whether that being to be reborn is a noble, or a brahmin, or a merchant, or a worker?

That being so, sirs, then what are you?

—That being so, sir, we do not know what we are. 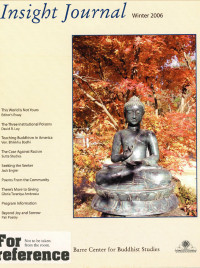 This World Is Not Yours

The Case Against Racism

There’s More to Giving Than We Think

Beyond Joy and Sorrow