Many of us in America today are thinking about security, wondering how best to keep our families and our nation safe. Because so much of the danger in the world lately seems to be focused in the Middle East and Southwest Asia, we most often encounter Islamic, Jewish and Christian perspectives on affairs in these regions. Perhaps it would be helpful to hear from one of the other great world religions. What is the Buddhist view of how to achieve safety and security in the world’s trouble spots, in America following last year’s attack, and even in our own communities?

One thing the Buddhist tradition emphasizes is the interdependence of all things. The world we inhabit is a vast network of interrelated systems—natural systems of earth, air and water, living systems of plants and animals, and human social, political and economic systems. In such a world every action has far-ranging effects, and often influences things in ways that go well beyond what is immediately apparent. This is particularly true of acts of violence, which often do as much or more harm to the perpetrator or to innocent bystanders as to the intended victim.

One morning while walking barefoot in ancient India the Buddha came across a young man who was pouring oblations and uttering mantras of protection while facing in each of the six cardinal directions (including the nadir and zenith). “How can you think such things will bring you security?” he asked. “I learned this from my father,” replied the young man. “It is how things have always been done.” “Listen,” said the Buddha, “and I will tell you how to make sure that each of the directions is truly safe and free from danger.”

He went on to describe how real security comes from cultivating and nurturing the network of social relationships within which each person finds themselves embedded. Caring for, supporting and respecting one’s parents as the eastern direction will ensure that they in turn will care for, support and respect their children. Doing the same for one’s wife or husband as the west, teachers and supervisors as the south, friends and colleagues as the north, workers and subordinates as the nadir, and spiritual guides as the zenith will similarly result in a reciprocal response and to the strengthening of the social bonds that connect one’s whole community.

For example, being kind, generous and honest with your spouse is the best protection from the turmoil of divorce and acrimony. Treating your employees fairly and sharing the fruits of their labor equitably is the best way to encourage their loyalty and cooperation. Nurturing your own children with love and devotion is more likely to result in them caring for you when you are eventually in need.

How does this basic principle apply to our country in this pivotal period of response to terrorist attack? The police action to go after the bombers and, by necessity, those who protected them may well have been an appropriate response to the immediate threat of danger. But our deeper, more lasting security will only come from the gradual transforma­tion of our relationships with people who are currently considered adversaries and who presently wish us harm. Turning enemies into friends is a surer way of protecting ourselves than returning violence with more violence.

Not too long ago we felt under tremendous threat from the Soviet Union, while today we refer to Russia and most of its former satellites as friends or even allies. Our new-found security has not come from our nuclear stockpile, but from the transformation of our relationship with a former adversary. There is no “axis of evil” in this view, only countries with whom the process of reconciliation has not yet been com­pleted. The wounds our network of relationships sustained from the Korean war, the Iranian revolution and the invasion of Kuwait have been slow to heal, but their eventual healing is inevitable.

Sometimes the conditions needed to allow for reconcilia­tion involve a change of regime, but in most cases this will happen by natural evolution. To do so by violent means amounts to war, and once loosed the dogs of war tend to wreak havoc in unimaginable ways. Instead of soothing an area of conflict by trying to heal the ruptured relationship, we are inflicting a fresh wound, with its own set of new and expanding dangers. This simply does not make us more safe; rather it exposes us to greater and often unforeseen hazards.

America will be safe from terrorism when its relation­ships with all parties in all directions are honest, noble and just. The entire Islamic world can change from adversary to ally if we can help find an equitable solution to the problems caused by the formation of the state of Israel and from its ensuing insecurities, if we could ameliorate the effect our lust for oil has upon all our dealings in the region, and if we could cultivate a real understanding of Islamic tradition. Treated with such respect, it is natural that even the more fundamen­talist elements in the area would reciprocate and would no longer yearn to do us harm. Similar healing through the cultivation of change in relationship can occur with the developing nations of the world, with the population that swells our prisons, and with alienated members of our own family.

This is not idealism; it is rooted in a deep understanding of human nature. The current trend of our country’s leader­ship is to pour the oblations and mumble the mantras of the last century, beating the drums of war, and in the long run this will only increase the danger faced by our nation and by the entire world. Can’t we try a wiser way? 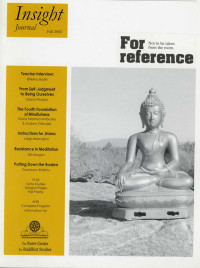 Climbing to the Top of the Mountain

Healing the Wounds of the World

From Self-Judgement to Being Ourselves

Putting Down the Burden

The Visuddhi Magga on the Brahma-Vihāras