After a hiatus of one thousand years, Theravadin women once more have the opportunity to ordain as bhikkhunis and thus become full members of the Sangha. Traditionally the Sangha is composed of fully ordained nuns (bhikkhunī), fully ordained monks (bhikkhu), novice nuns (sāmaṇēri), and novice monks (sāmaṇera).

From the 3rd century BCE when King Ashoka’s son, Mahinda, and daughter, Sanghamitta, brought the ordination lin­eages of both monks and nuns from In­dia to Sri Lanka, there was a long, proud history of male and female monasticism on this island.

In the 11th century, as a result of war, drought and famine, both the monks’ and nuns’ orders died out in Sri Lanka. The bhikkhu order was revived within one generation by inviting a group of bhikkhus from Siam (Thailand] who fulfilled the requirements for giving bhikkhu ordination. However, as the bhikkhuni order did not exist in any other Theravada country, the requirement that a bhikkhuni receive her ordination from a group of ten bhikkhunis of ten years standing followed by a further ceremony presided over by monks could not be met. Thus the bhikkhuni lineage lapsed.

Hence, since the beginning of the 11th century, women wishing to commit them­selves to the renunciate life have had only one option: ten lay precepts. Even the ten precepts of a sāmaṇēri have been denied them, since in the Theravada tradition these can be given only by a bhikkhuni. The status of these ten precept nuns, known a Dasa Sil Matas (literally Ten Precept Moth­ers), is ambiguous; they are considered neither proper monastics nor lay women either. 1

The situation in the other Theravada countries is even more difficult. It seems that in Thailand and Cambodia there never were bhikkhunis, and although they were possibly present in Burma at one time, there too the lineage did not survive. In modern times, Burma has nuns with the ten lay precepts who, like the Dasa Sil Matas in Sri Lanka, are not thought to be true nuns. In Thailand and Cambodia, even the ten lay precepts are denied women, and the nuns there are restricted to eight precepts with a corresponding diminishment of status. 2

Thus the four-fold community of fully ordained nuns, fully ordained monks, lay women and lay men, which the Buddha clearly declared was integral to the suc­cess of the Buddhadhamma, has been ab­sent from all Theravada countries for one thousand years.

Recently, however, after extensive re­search by a group of women from Sri Lanka and Europe, it was confirmed that the bhikkhuni lineage extant in Taiwan and Korea is actually of Sri Lankan origin and therefore could legitimately be used to ordain Theravada nuns and restore the bhikkhuni order.

Although I received novice ordination in the Tibetan tradition in 1993, being in my heart a Theravadin and having a long association with the Thai forest tradition, I decided recently to go to Sri Lanka to receive the sāmaṇēri vows of the Thera­vada vinaya school. 3 It was a very happy experience for me, and I came away deeply impressed with the situation that is developing there—impressed with the bhikkhunis and sāmaṇēri I met, and in­spired by the impact the female sangha is having on their society.

Since the first ordination of Sri Lankan bhikkhunis in 1996, which was conducted in Sarnath, India by Korean monks and nuns, there have been further ordination ceremonies in Bodh Gaya and in Sri Lanka. There are now over 200 fully ordained nuns as well as many novice nuns who are planning to receive the higher ordination, which they are eligible to do after having kept their sāmaṇēri vows for two years.

Behind this amazing resurgence is an organization called Sakyadhita, Daughters of the Buddha, which was established at a conference of Buddhist women held in Bodh Gaya in 1987. Since then there have been six Sakyadhita conferences, includ­ing one held in Colombo, Sri Lanka in 1993. At the time of that conference there was strong opposition from the religious authorities of Sri Lanka even to placing the topic of bhikkhuni ordination on the agenda. However as an outgrowth of that conference, and from the exposure the Dasa Sil Matas have had to fully ordained nuns from other traditions, the aspiration to revive the Theravada bhikkhuni lineage was born. With careful negotiation over several years and the eventual support of prominent members of the (male) monastic community, the situation changed completely.

It has been said before that there is nothing more powerful than an idea whose time has come.

Much of the vision and energy for the project has come from Mrs. Ranjani de Silva, who attended the first Sakyadhita conference in Bodh Gaya, has been its President since 1995, and who conceived and organized the 3rd conference in Co­lombo.

During my visit to Sri Lanka I stayed at the Sakyadhita Training Centre established at Panadura, south of Colombo. At the Centre regular programmes are organized for the nuns on such topics as community health care, counseling skills and social development. Nuns come from small nunneries all over the island to at­tend these training sessions; they seem to be motivated by a strong desire to be of practical benefit in their communities. There are also young nuns attending uni­versity where they are studying Pali lan­guage, Buddhist philosophy, Buddhist his­tory and other related topics.

In addition to providing the facilities for these training programmes, the Cen­tre is ‘home’ to seven nuns, and I felt privi­leged to have the opportunity to spend time with them. Some of them are do­ing university studies, and the older, edu­cated nuns teach. Neighbourhood chil­dren come for Dhamma classes; local people, often women, come to talk, to receive advice, or to participate in the evening puja.

On three occasions during my brief stay we were invited out to family homes for the daily meal. Two of these were anniversaries of family deaths, and the se­nior nuns conducted all the necessary cer­emonies with confidence and dignity. In the past it would have been monks fulfilling these functions, so it is significant that some families are now choosing to invite nuns to officiate instead.

For me, however, it is the third invita­tion that is the most memorable. It came from a rather poor family living just down the lane near the Sakyadhita Centre. When the Centre was first built and the nuns began living there, the husband, known in the neighbourhood as an abusive drunk­ard who terrorised his family, was deeply hostile to the presence of the nuns. I was told that if he discovered his wife or three young daughters had visited the nuns, they were beaten. And there we were, two years later, being offered a meal by the whole family, sober husband included, in their living room. The reverence, the de­light and the quiet pride were palpable.

2 The eight precepts are similar to the ten pre­cepts outlined in the above note with the amal­gamation of the 7th and 8th and the removal of the 10th.

3 The Tibetan tradition also lacks full ordina­tion for nuns; however in that tradition both male and female novice ordination can be given by monks. 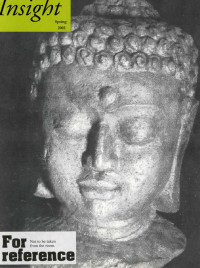 The Buddha Taught Nonviolence, Not Pacifism

Zazen Is Not the Same as Meditation

Skinny Gotamī and the Mustard Seed