At one time the Buddha was living in Magadha, just below the hills, near a brahman village called Ekanāla. At that time the brahman Kasibhāradvāja had yoked together a number of plows, for it was planting time.

The Buddha arose in the morning, and having dressed and taken up his bowl he went up to where the brahman Kasibhāradvāja was working. At that time the farmer was feeding his workers. So the Buddha went up to where that feeding was taking place and stood to one side.

“I do indeed plow and sow, brahman,” replied the Buddha, “And only after having plown and sown do I eat.”

“But, Gotama, we do not see your yoke and plough, nor your ploughshare, oxen or goad. And yet you say you plow and sow, and eat only after having plown and sown!

And then the brahman Kasibhāradvāja addressed the Buddha with this verse:

So you claim to be a farmer…
But we do not see you ploughing!
Tell me, since you’re asked, of ploughing,
So I’ll know what you call “ploughing”.

Faith is the seed, practice the rain,
And wisdom is my yoke and plough.
Modesty’s the pole, mind the strap,
Mindfulness my ploughshare and goad.

Body and speech are guarded well,
And food and drink have been restrained.
Truthfulness I use for weeding,
And gentleness urges me on.

Effort is my beast of burden,
Pulling me onward to safety.
On it goes without returning,
Where, having gone, one does not grieve.

This is how I plough my ploughing—
The crop it yields is deathlessness!
And when one has ploughed this ploughing,
One is released from all suffering.

Then the brahman Kasibhāradvāja filled a large bronze bowl with food and offered it to the Buddha: “Please eat, Gotama sir, this food! You are indeed a farmer! Surely you plough the ploughing that yields the crop of deathlessness!” 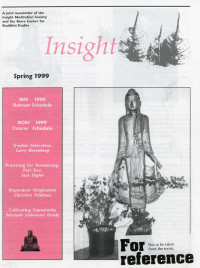 The Wisdom of the Ordinary Mind

You Call Yourself a Farmer?: Kasibhāradvāja Sutta (SN 76-80)