One question that often comes up for the modern student of Buddhism is “What did the Buddha teach?” The short answer, it seems to me, is something like “Who knows?” It’s kind of like asking “What is a tree?” (or any other question, for that matter). There is just no getting at what something really is. All that can be said is what it looks like from this perspective or that point of view, which, when you think about it, is saying far more about ourselves than about the tree, or about what the Buddha really taught.

We can look at a tree in terms of its biology or chemistry, its shape, species, or color, or the evocative beauty of its shimmering leaves in the autumn twilight breeze. It’s a home to the squirrels, a threat to the foundation of a nearby home, a dinner platter for a host of insects and the many birds who feed off them. It’s one thing to the carpenter, another to the developer, and something else entirely to the ten year old boy with some old boards and a handful of nails. I could go on, but I think the point has been made. It’s all a matter of how you look at it.

The same is very much the case for our understanding of what the Buddha taught. Just as the scientist might feel that he has a more definitive, “objective” perspective on the tree, so also the scholar of religion tends to wield a certain authority on the teachings of the Buddha, at least in her own mind. Even with a sophisticated grasp of the hermeneutical issues, an expansive appreciation of the historical context, and a near mastery of ancient linguistic nuance, there is no escaping the pivotal insight of the post­modern world: all meaning is locally constructed. At the end of the day all constructions of knowledge are merely constructions.

An understanding of what the Buddha taught is spread across everyone who has ever heard and construed those teachings, because such an understanding is a local event taking place in a specific moment of interpretation by a particular individual. That individual may be trained in the study of religion, or steeped in the meditative arts, or embedded in a specific agenda, or inept at thinking outside a limited comfort zone…or all of the above. In fact, the only thing certain is that everyone trying to understand what the Buddha taught will be coming at the question from a specific and limited perspective. Actually, there is another thing that is also certain: none of these perspectives stands much chance of getting at what the Buddha really taught.

This is not to merely say that “everything is relative” and, therefore, “whatever.” How each one of us constructs our local world of meaning is a matter of ultimate concern. Indeed, there is nothing more important or deserving of care. Whether we construct ourselves and our world skillfully or unskillfully determines whether or not we suffer.

What guidelines did the Buddha leave to help us understand as best we can what it is he taught?

To begin with, he seems well aware of the problem. Even during his lifetime, people were regularly misconstruing his teaching, either inadvertently or deliberately. “Misguided man, to whom have you ever known me to teach the dhamma in that way?” he says to Ariṭṭha, the former vulture-killer who tries to say obstructions are not really obstructions (M 22), and to Sāti, the former fisherman who thinks his consciousness will survive his death (M 38). From the earliest times he seems to have been regularly misrepresented by those “who declare as spoken or uttered by the Tathāgata what has not been spoken or uttered by the Tathāgata.” (A 2:3.3).

The Buddha was therefore quite careful about how his teachings were to be handed down, stating, “Two things incline to establishing the non-confusion and non-disappearance of true dhamma: correctly laying down the words and phrases, and correctly interpreting their meaning.” (A 2:2.10) And, we are told, whenever in doubt about whether a teacher is accurately conveying the doctrines of the Buddha, “Their words and phrases should be carefully studied and compared with the suttas, and reviewed in the light of the practice.” (D 16:4.8).

The first part of this advice is a matter of historical accuracy, critical scholarship, and a certain degree of common sense. But the second part, dealing with “correctly interpreting the meaning” and “reviewing in the light of the practice” is another matter entirely, and calls for a different set of skills.

The dhamma is meant to be enacted. It is a blueprint for how to reorganize the function of the mind and body in the present moment, and as such its meaning can only be recovered if it is put to use. The best answer to the question of what the Buddha taught, therefore, will be found not in the texts but in experience. It is important to direct attention in a particular way within experience, and the instructions for how to do that are to be found in the texts. But the meaning of the Buddha’s teaching, which is ultimately found in the insights yielded from that right view, will only manifest when his wisdom is enacted locally, in the transformation of a person.

As he famously tells the Kālāmas, “When you know for yourselves that these things are wholesome…these things, when entered upon and undertaken, incline towards welfare and happiness—then, Kālāmas, having come to them you should stay with them.” (A 3:65) So the best way to discern what the Buddha taught is to become what the Buddha taught. Carefully build the raft, diligently paddle it to the other shore, and become one who knows. 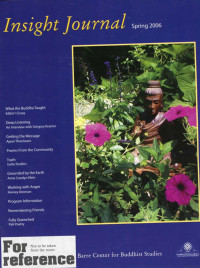 What the Buddha Taught

Grounded by the Earth