Fear is born from arming oneself.
Just see how many people fight!
I’ll tell you about the dreadful fear
that caused me to shake all over:

Seeing creatures flopping around,
Like fish in water too shallow,
So hostile to one another!
—Seeing this, I became afraid.

This world completely lacks essence;
It trembles in all directions.
I longed to find myself a place
Unscathed—but I could not see it.

Seeing people locked in conflict,
I became completely distraught.
But then I discerned here a thorn
—Hard to see—lodged deep in the heart.

It’s only when pierced by this thorn
That one runs in all directions.
So if that thorn is taken out—
one does not run, and settles down.

Who here has crossed over desires,
the world’s bond, so hard to get past,
he does not grieve, she does not mourn.
His stream is cut, she’s all unbound.

What went before—let go of that!
All that’s to come—have none of it!
Don’t hold on to what’s in between,
And you’ll wander fully at peace.

For whom there is no “I-making”
All throughout the body and mind,
And who grieves not for what is not
Is undefeated in the world.

For whom there is no “this is mine”
Nor anything like “that is theirs”
Not even finding “self-ness,” he
Does not grieve at “I have nothing.”

The Sutta Nipāta is probably one of the most diverse collections of discourses to be found in the Pali Tipitaka, and the chapter from which this sutta is taken, the Atthaka-vagga, may well be the oldest portion of the entire canon. It is composed mostly in verse, and includes some lovely poetry.

There is something particularly moving for me about this poem, perhaps because it is composed in the first person and appears to reveal the process through which the Bud­dha himself came to understanding; perhaps because of the vulnerability expressed in the opening stanzas, where he admits his fear and sense of dread over the the nature of the human condition. Or maybe it is just the utter simplicity of first, the problem (people hurting each other), and then its cause (basic human selfishness, driven by desire), and finally, its solution (letting go of the ego’s attachments). How easy he can so often make it all sound!

The first line alone is a counter-intuitive show-stopper. Conventional wisdom suggests that arming oneself is a prudent re­sponse to fear of self-injury. Yet the Buddha’s wisdom goes deeper to observe how this ac­tually contributes to the generation of more fear. Do we really feel more safe when we lash out at our critics and adversaries? Our culture certainly assumes so; but the Bud­dha is offering an alternative response, emerging from his own experience.

The phrase translated here as “arming oneself,” which serves as the title of the sutta, is elswhere rendered “embracing violence” (Norman) or “violent conduct” (Saddhatissa). The basic image is of a person taking up a stick, (daṇḍa); the stick being a com­mon symbol in Indian literature for both vio­lence and punishment.

The reader can hardly help feeling swept up in the emotional turmoil of the author. The tension mounts as the fear and despair builds, and then breaks suddenly with the insight that, like an animal driven to mad­ness by an injury, mankind is not evil by nature but is only driven to violence by the relentless pressure of desire.

The latter half of the poem describes how to cultivate a state of mind—a stance within unfolding experience—that avoids the dys­functional move of creating and projecting oneself on every situation.

These few verses embrace the whole of the four noble truths: the suffering manifest as violence, its cause by the thorn in the heart, the “unbinding” or crossing over this, and the way to cultivate the selflessness that constitutes real freedom. 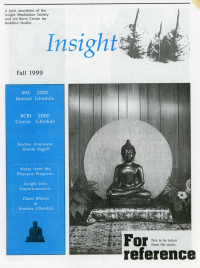