At one time the Buddha was residing in Magadha,
near [a place called] Andhakavinda.

At that time the Buddha was seated under the open sky,
in the deep darkness of the night,
and the rain-god was making it rain, drop by drop.

Then the Brahmā Sahampati, as the night was passing away,
lighting up Andhakavinda with his surpassing brilliance,
approached the Buddha and stood to one side.

As he stood to one side, the Brahmā Sahampati
offered up these verses in the presence of the Buddha:

Let the wilderness serve for your seat and bed!
Freed from fear; and in the fearless, released.
In places where frightening serpents abide,
Lightning clashes and the rain-god thunders,
In the blinding darkness of the deepest night,
There he sits—the monk who’s vanquished his dread.

Let the wilderness serve for your seat and bed!
Go about set free from the ties that bind.
But if, perchance, you don’t find there your bliss, then
Live in a group—but watch over yourself:
Mindful, proceeding for alms from house to house,
Mindful, with guarded faculties—and wise.

The theme of Sahampati’s first lines is fear, a present issue for the followers of the Buddha who were encouraged to practice alone in the depths of the wilderness. Poisonous snakes are a source of fear, as are the thunder, lightning and profound darkness of the night. The “dread” overcome by the bhikkhu in the last line of the verse is literally the wonderful phrase “the hair standing upon the back of one’s neck.” (In oral presentation the long phrase would be pronounced with contractions in order for the line to fit into the 11-syllable meter of this trisṭubh poetic form.) It suggests the terrifying creeping anxiety of threatening forces only partly imagined or understood.

The play on words in the second line is clever, equating freedom from fear with the liberation of nibbāna, which is sometimes given the epithet “the fearless.” Since fear is always rooted in protection of the ego, working with fear is a useful practice for overcoming the ego’s instinctive defenses. Awakening results in fearlessness because one lets go of the need to protect the limited view of oneself as one gains a much wider perspective.

The second verse allows that dwelling as a hermit, though a powerful practice, may not be appropriate for everybody; for many it is better to live in community. But one should not thereby consider oneself free from the objects of fear, because ultimately these forces are all within us. Removed from the dangers of the wilderness, a person must be especially attentive to watching over the workings of their own mind. In community, the serpents of ill will, the storms of desire, and the darkness of delusions are equally dangerous for those seeking the peace of liberation. And mindfulness is our greatest ally in watching over or guarding the workings of our minds as we try to get along with others. 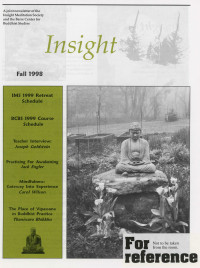 To the Forest for Refuge

One Tool Among Many: The Place of Vipassana in Buddhist Practice