Maria Heim is Professor of Buddhist Studies in the Religion Department at Amherst College, MA. She specializes in Pali Buddhism, and her recent book is entitled “The Forerunner of All Things: Buddhaghosa on Mind, Intention, and Agency.” She is currently working on a book on emotions in premodern South Asian texts and a second one on interpreting the Buddha’s words.

Insight Journal: Tell us something about your path to the Dharma.

Maria Heim: I became interested in Buddhist philosophy studying it in college, but that was in the context of being fascinated by Indian thought more broadly.

IJ: Buddhaghosa evokes some strong reactions among some Western Buddhists. Some tend to blame him for what they see as the intransigently conservative aspects of Theravada Buddhism. What is your take on who he was and what his intentions were?

MH: Buddhaghosa is very forthright about his intentions. He sees himself as a caretaker of the teachings in that he is preserving and extending them so that future generations (like us) will have access to them. While he, like other commentators in the premodern Indian tradition, disavows originality, I see him as offering startlingly fresh readings of the texts. What I appreciate about him is his very humane and down-to-earth exploration of human psychology, though this is couched within a very erudite and sometimes forbidding scholarly idiom. People should keep in mind that the majority of the work attributed to him has not been translated and very few scholars work on him, so the full extent and depth of his thought is not well known.

I am writing a book on what Buddhaghosa had to say about the process of interpreting the Buddha’s words. In particular I am exploring the rather sophisticated ways he thought that scripture might be read so that we could begin to grasp how the Buddha’s omniscient understanding could be conveyed in the limited vessels of texts to very limited (that is, not omniscient) understandings like ours. Buddhaghosa thinks that reading and interpreting the Buddha’s words should be an endless practice — there is no way one could come to the end of reading and grappling with even one sutta , for example. This very open-ended, but still highly disciplined, interpretative practice makes the teachings live in both the past and the present. I don’t see this as a conservative reflex.

MH: The Visuddhimagga is many things, and one of them is that it is a compendium of Abhidhamma. As such, it is a brilliantly systematic manual of the some of the most technical teachings. What it does not do is convey the lively immediacy of the Buddha’s conversations with all sorts of different people that we find in the Suttas. When we see how the Buddha was responding to the wide range of people he encountered, and how he spoke specifically and pointedly to them (something Buddhaghosa’s commentaries on the Suttas help us to appreciate, by the way), we realize just how extraordinary this ancient genre of dialogue is.

We might compare this situation with Socrates’ dialogues and see that a compendium of Socrates’ teachings abstracted from the dialogues would have to be read in tension with the living dialogical and conversational style of his contextual and back-and-forth form of philosophical inquiry. So too nothing can replace the vivid quality of the Suttas’ contextually-situated narrative encounters. But Buddhist thought is given to us in different genres and each genre makes possible different kinds of understanding. Again, this attention to genre is something Buddhaghosa was well aware of and has taught me a lot about.

IJ: Which suttas do you single out for study in your course?

MH: I really appreciate the collection that Bhikkhu Bodhi has translated called “In The Buddha’s Words,” and I use it a lot in my courses.

IJ: What does Buddhaghosa’s psychology add to what we find in the earlier texts?

MH: One thing he does is work out in detail, with an eye on the practical and institutional realities of life-on-the-ground, what the jhana practices, such as the brahmaviharas, involve. These are mentioned in the Suttas, but we don’t learn what the full practice consists of nor the psychological intricacies of them until Buddhaghosa’s exposition. Buddhaghosa offers, I believe, the most fine-grained and subtle work on human psychology in all of Buddhist thought; this is due in part because he was deeply steeped in Abhidhamma.

IJ: You mention the brahmaviharas as a jhana or concentration practice. Is that how Buddhaghosa sees them?

MH: Yes, that is how he sees the brahmaviharas: as jhana practices. Buddhaghosa is entirely clear: they are samatha meditation practices that occur in the section on samadhi. They are not a matter of sila or morality.

I am aware that this may be startling for some practitioners, but it is quite clear in the Visuddhimagga. I will of course talk about it when I teach at Barre. There are some important implications. He does not have much to say about them outside of their role in jhana.

IJ: Even those who take issue with Buddhaghosa generally agree that he got one thing right: the role of ethics in Buddhadharma as fundamental. How do you approach that in your thinking?

MH: Indeed, for him ethics — sila, which means not violating the five precepts and not practicing the ten wrong deeds — is the foundation of everything else. For him it is a direct and practical issue: if you can’t keep your behavior from being problematic, at least at the gross level, you won’t be able to even begin to concentrate.

IJ: Your book explores our notions of intention and what it means to be a moral agent. Can you flesh out a little what your concerns are?

MH: Every beginning student of Buddhism notices the Buddha’s claim that karma is a matter of intention. My book asks, what is meant by intention? The canonical sources do not address this question as richly as the commentaries do, and so my book is a very close study of Buddhaghosa’s ways of interpreting ideas about intention. But just as in English ideas of “intention” and moral agency differ in different kinds of contexts and discourses (we use it differently in legal contexts than in neuroscience or in everyday conversation, for example), so too does intention differ in the various intellectual and practical contexts in Buddhist sources. Buddhaghosa is very explicit about this. My book traces how a cluster of ideas related to intention are discussed and described in the Suttas, Abhidhamma, Vinaya, and narratives, as Buddhaghosa saw them.

I am interested in how Buddhist thinking about moral agency is often quite different than modern western thinking about it and challenges us to have very different paradigms and categories for sorting out these ideas than we usually have. Ideas about “free will,” for example, are not a central preoccupation for Buddhaghosa.

IJ: Based on your research, do you have any insights that might be helpful for Western Buddhist practitioners concerning the role of intention and ethics?

MH: One thing that I think Buddhaghosa emphasizes time and again is that morality is a matter (simply, or rather, not so simply!) of stopping doing bad things.

IJ: You have a very nice positive way of putting this in your book, “The Presence of Absences.” I think I will just quote it here?

MH: OK.
“…while it may make for a smoother English translation to say something like ‘freedom from remorse occurs for those who practice sila,’ I have deliberately kept the translation as literal as possible here to show how these absences are things that arise: non-remorse arises for people not violating the precepts. Non-remorse is an absence of remorse that arises–is present, as it were–coming about as a result of certain processes (specifically, not committing immoral acts), and in turn making possible other things (joyful experience). I believe that the language of absences is not just a quirk of the Pali, but rather an important feature of this moral psychology that identifies experiences of absence as the conditions for other experiences that cannot otherwise occur…”1

IJ: To circle back to your upcoming course, Buddhaghosa refers to “the freedom of the loving heart.” This sounds radical to modern ears, given that we usually associate love with attachment, dependency, grief, and so on. How does love become freeing?

MH: “Freedom of the loving heart” is my way of translating “metta cetovimutti,” which was translated somewhat more flatly in Ñanamoli’s (otherwise wonderful) translation, so we may not have appreciated its full force. For Buddhaghosa love is the constant (in fact, never-ending) process of ridding ourselves of the hatred, delusion, envy, and greed that otherwise enslave us. It is the condition for freedom, not its antithesis. 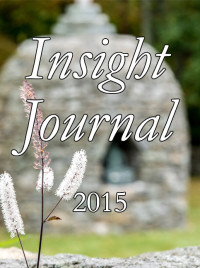 Jhānas, Lucid Dreaming, and Letting There Be Just Seeing in the Seeing

The Dynamics of Theravāda Insight Meditation

The Four Assemblies and Theravāda Buddhism

Love and Compassion in the Visuddhimagga

The Buddha Doesn’t Do “Cozy”

A Philosophical Assessment of Secular Buddhism