The notion of developing the mind lies at the heart of the Buddhist tradition. Development (literally “causing to be”) has to do with strengthening the ability to focus, to stabilize, and to direct the mind, rather than allowing it to be carried off by whatever breezes waft in upon it from the senses or from its own unconscious. The question is whether your mind controls you or you control your mind. If your intention is to keep your attention on the breath, but it wanders off at the slightest provocation, then your ability to focus the mind is undeveloped. Yet remaining focused on a chosen object is a skill that can be learned, like any other, by practice, patient repetition, and gradual development.

In this case the skill developed is the ability to resist or deflect the influence of passion (raga), a word used more or less synonymously with desire, craving, attachment, etc. and thus the core cause of suffering. The effectiveness of a well-thatched roof (as they all were in those days) lies in its ability to deflect moisture and protect the contents of the house from getting soaked. By analogy, a well-developed mind will be aware of an unwholesome emotion that has arisen, for example, or a provocative sense input, but will allow these to roll off the mind and not penetrate into ensuing mind moments to drench the mind with clinging. A similar image often used in early Buddhist literature is of water rolling off a lotus leaf or the feathers of a duck.

This is an image of the Pali with full diacriticals. 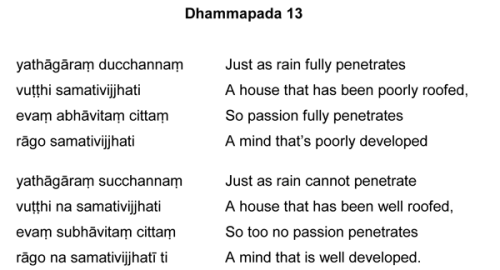 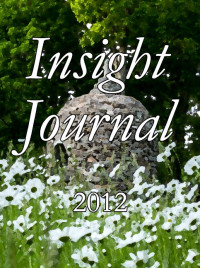