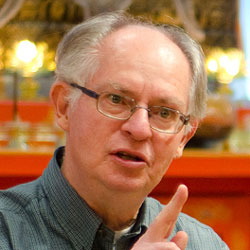 Roger Jackson is John W. Nason Professor of Asian Studies and Religion, Emeritus, at Carleton College, Minnesota, where he taught the religions of South Asia and Tibet. He has a Ph.D. in Buddhist Studies from the University of Wisconsin, where he studied under Geshe Lhundub Sopa. His scholarly interests include Indian and Tibetan Buddhist systems of philosophy, meditation, and ritual; Buddhist and other types of religious poetry; the study of mysticism; and the contours of modern Buddhist thought. His books include Is Enlightenment Possible? (1993), Tibetan Literature (with José Cabezón, 1996), Buddhist Theology (with John Makransky, 1999), Tantric Treasures (2004), The Crystal Mirror of Philosophical Systems (with Geshe Sopa et al., 2009), and Mind Seeing Mind: Mahāmudrā and the Geluk Tradition of Tibetan Buddhism (2019). A frequent contributor to scholarly conferences and journals, he edited the Journal of the International Association of Buddhist Studies from 1985 to 1993, and co-edited the Indian International Journal of Buddhist Studies from 2006 to 2018. He has been a student and practitioner of Tibetan Buddhism – especially in the Geluk tradition – since 1974, and has taught Buddhist history, doctrine, and meditation at Buddhist centers in the Twin Cities and other parts of the U.S. since 2002.