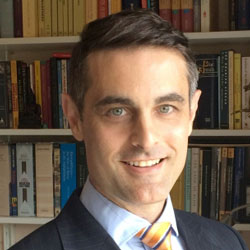 Greg Seton, Senior Lecturer of Religion at Dartmouth, is a scholar of both ancient and modern Buddhist texts in Tibetan and Sanskrit, specializing in Buddhist philosophy and the theoretical frameworks for the meditational practices inspired by the Buddhist “Scripture on the Perfection of Wisdom.” Initially earning a BA in Film Studies from Wesleyan University in 1990, graduating from the American Film Institute, and working in the film industry as an award-winning writer and director for nine years, he returned to academia in 2001 to do his first masters degree in Indo-Tibetan Buddhist Studies. After receiving his DPhil in Buddhist Studies from the University of Oxford, he took a position as professor of Tibetan and Indian Buddhist Studies at Mahidol University in Thailand. Through his DAAD fellowship at the University of Hamburg in Germany, he studied and critically edited the historically important Indian commentary on the Perfection of Wisdom based on 11th and 13th century palm leaf Sanskrit manuscripts and 15th century Tibetan block prints. His study and translation of the commentary and scripture, along with his Tibetan and Sanskrit critical editions of them, is set to be published as a four volume set.