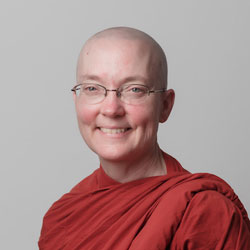 Ayya Santussika is a Theravada bhikkhuni who is trained and practicing in the Thai Forest tradition. Her faith in the Dhamma developed during many visits to monasteries of Ajahn Chah and his disciples in Thailand, America, England, New Zealand, and Australia beginning in 1998. She has been training as a nun since 2005 in large and small monasteries in both England and America. In 2012, she received full ordination as a bhikkhuni and founded Karuna Buddhist Vihara, where she currently lives, located in the Santa Cruz Mountains near Boulder Creek, California. Her Dhamma teachings are primarily based on the Pali suttas.