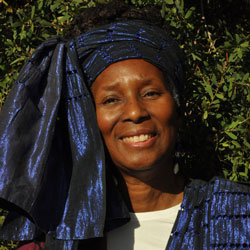 Arisika Razak, MPH is professor emerita and the former Chair of the Women’s Spirituality Program at the California Institute of Integral Studies. Her teachings incorporate diverse spiritual traditions, women’s health and healing, and multicultural feminisms, with a special emphasis on the spiritualities and cultures of women of the African Diaspora. An inner-city midwife of over twenty years, Arisika has led healing workshops and ritual celebrations for women for over three decades. She is currently a core teacher at the East Bay Meditation Center in Oakland, where she leads embodied spiritual workshops that draw from diverse spiritual traditions, and include meditative movement, contemporary diversity theory, and creative methodologies. A core member of the SF Bay Area’s Purple Moon Dance Project, Arisika has performed nationally and internationally as a spiritual dancer for over 30 years, appearing at the National and Women’s Music Festivals, the Juk San International Festival in Korea, and the Women of Power Conference in Sweden. A regular contributor to books and journals, her film credits include the documentary, Alice Walker, Beauty in Truth; Fire Eyes, the first full length feature film by an African woman on female genital cutting; and Who Lives Who Dies a PBS special on health care services to underserved populations.